Rush: ‘You Could Legalize Rape’ If You Claimed It Was a ‘Civil Rights’ Issue 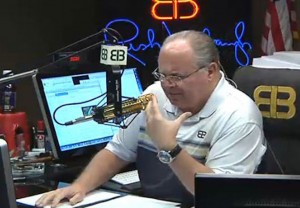 Rush Limbaugh joked that “you could legalize rape” as long you did under the pretense of passing civil rights legislation.

Taking a call from a listener lamenting that “the media is not covering this transgender thing the way normal people, or sane people like myself,” see it. “It’s really interesting how they took gun control and turned it into gun safety, but they’re not treating this as a safety issue,” the caller added.

“No, that’s actually a good point,” Limbaugh responded. “Civil rights — you could legalize rape if you called it the Civil Rights Act of 2016.”

Limbaugh went on to argue that “civil rights” was a gild the left applied to get its way on a host of issues: “If you call it a civil right, then you automatically make it impossible for people to oppose it,” he said.