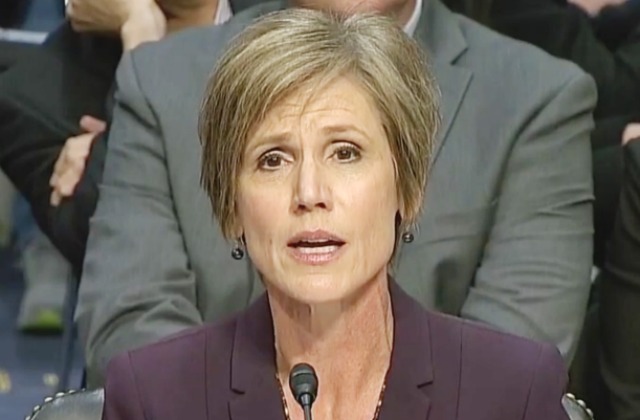 Remember Sally Yates, the acting attorney general fired by the Trump administration back in January? She has publicly resurfaced with a new op-ed in The Washington Post criticizing Attorney General Jeff Sessions.

The topic of Yates’ op-ed is criminal justice reform, and she touts the bipartisan agreement on this issue before getting to Sessions:

Last month, Attorney General Jeff Sessions rolled back the clock to the 1980s, reinstating the harsh, indiscriminate use of mandatory minimum drug sentences imposed at the height of the crack epidemic. Sessions attempted to justify his directive in a Post op-ed last weekend, stoking fear by claiming that as a result of then-Attorney General Eric H. Holder Jr.’s Smart on Crime policy, the United States is gripped by a rising epidemic of violent crime that can only be cured by putting more drug offenders in jail for more time.

That argument just isn’t supported by the facts.

“While there is always room to debate the most effective approach to criminal justice, that debate should be based on facts, not fear,” she concludes. “It’s time to move past the campaign-style rhetoric of being ‘tough’ or ‘soft’ on crime. Justice and the safety of our communities depend on it.”

And Yates may have already set up a Twitter account (though as of this posting it has not been verified yet [UPDATE –– 11:44 pm ET: Yates’ account is now verified]):

My first tweet as a private citizen. Read my op-ed responding to AG Sessions on the need for criminal justice reform https://t.co/143F3hagva

You may recall that last month, Yates publicly testified that there was a concern that Michael Flynn was in a situation where he could be “blackmailed by the Russians.”