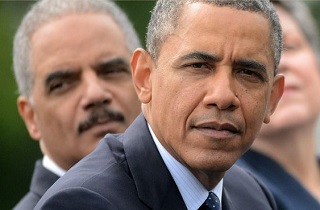 President Obama‘s powerful speech on the aftermath of Trayvon Martin‘s unpunished killing has spawned a panoply of reactions, but one Salon writer’s review of the President’s remarks is drawing molten-hot criticism on Twitter. Demos Senior Fellow and sometime Up panelist Richard Benjamin blasted the speech as a tepid shadow of Attorney General Eric Holder‘s advocacy, and declared that “Some of us have an Inner Child. Others have an Inner Nigger. Is Holder the president’s conscience? Or his Inner Nigger?”

Finally the president has spoken about George Zimmerman’s acquittal. Even as the country waited for his singular response – the nation’s leader and a law professor who once looked like Trayvon Martin – the president danced around the issues. And what a dramatic anti-climax, listening to the president refuse to say anything insightful or profound about the acquittal. In signature professorial style, the president gave us the “context” to the episode and to black people’s “pain.” But he didn’t offer a meaningful opinion on the episode’s hot molten core: racial profiling, vigilantism, and “Stand Your Ground” laws.

Meanwhile, Attorney General Eric Holder delivered trenchant thoughts on the acquittal, demanding action. Before an audience of supporters, Holder recently called for a full investigation of Martin’s death after Zimmerman’s acquittal. Holder vowed that the Justice Department will act “in a manner that is consistent with the facts and the law. We will not be afraid.”

“We must stand our ground,” he told supporters.

Is Holder the president’s aggressive internal mind and voice — willing to speak truth to power, but unbothered with appearing like an angry black man?

The President has faced harsh provocations from other black commentators, but this is a whole different level. The post drew swift criticism from the This Week In Blackness tag team of Elon James White and Angry Black Lady Imani Gandy, including sharp rebukes of Salon‘s editors:

@elonjames Seriously @RichBenjaminUSA. What the fuck dude? Of all the framing around this you would use “Inner Nigger” to make this argument?

@elonjames Whether you thought that Obama’s speech is lacking or not, deliberate link bait like this is cheap and problematic at best.

@AngryBlackLady When I said publish more voices of color, this wasn’t what I had in mind, @Salon.

@elonjames Wow. And @Salon–do you guys not have editors? What editor in their right mind sees “Inner Nigger” and thinks “Publish this ASAP.”

@elonjames Fuck your career. This isnt about how many hits you can get. This is so much bigger than that and muthafuckas out here trying to be popular.

@elonjames At this point @Salon should rename itself “White Liberal Bullshit Weekly.”

@AngryBlackLady And @Salon published that nonsense by @RichBenjaminUSA with Trayvon’s name spelled incorrectly in the photo caption — so that’s delightful.

@goldietaylor I don’t even know what to say. Why would a progressive site publish a piece re: POTUS’ “inner n-word”?

I always liked Benjamin as a panelist on Up, and I hope he doesn’t get fired for this. My feeling is that the best response to problematic speech is more speech, not less. In this case, I’d be especially interested to know what Benjamin was trying to accomplish with his word choice, beyond blunt provocation, and if he’s prepared to have his words parroted by the likes of Rush Limbaugh on Monday morning. That’s a sound that hurts, no matter how accustomed you get to it.

Benjamin’s provocation is something he’ll have to wrestle with, but on the substance, he’s got half a point. Eric Holder has been much more vocal and active on issues of race during this administration, but the speech the President gave today was as unflinchingly far from a Beer Summit as anyone could reasonably expect. Yes, President Obama could have given this speech as a candidate, and enjoyed a nice, long career as a Senator.

Update: Rich Benjamin added an update Saturday morning, in response to the uproar. You can read that here. For what it’s worth, I think people understood the point he was reaching for, but after reading his explanation, I still don’t understand how the term “inner n*gger” helped him get there.

Twitter user @dvnix has a thorough aggregation of tweets on the subject here.