Sanders Calls Planned Parenthood ‘The Political Establishment,’ Gets Piled On by the Left

Sanders Calls Planned Parenthood ‘The Political Establishment,’ Gets Piled On by the Left 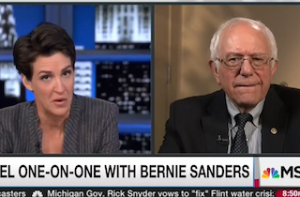 Last night, presidential candidate Bernie Sanders appeared on The Rachel Maddow Show to discuss his campaign, his interest in doing more debates, and his reaction to his primary opponent, Hillary Clinton, being endorsed by high-profile progressive groups. Chief among those groups is Planned Parenthood, whose endorsement of Clinton has generated a lot of attention from media and politicians on both sides of the party line.

When Rachel Maddow pressed him, Sanders said he was proud of his campaign’s endorsements from organizations like MoveOn.org and Democracy for America and also mentioned that he would love to accrue more from other progressive groups, but that it is important to remember that these groups themselves can be part of the establishment he is working to fight.

He said, “We’re taking on the political establishment … and some of these groups are part of the establishment.”

It didn’t take long for Clinton’s supporters to jump on Sanders, led by the organization in question and the candidate herself.

Really Senator Sanders? How can you say that groups like @PPact and @HRC are part of the “establishment” you’re taking on? -H

We respect @SenSanders. Disappointed to be called “establishment” as we fight like hell to protect women’s health. https://t.co/kiimTsVw2x

Wow – who knew advocating for women’s repro rights against an avalanche of right wing attacks makes you part of the establishment?

Ugh. Planned Parenthood isn’t “the establishment” & it’s crude & dishonest for Sanders to call them that for endorsing HRC.

@PPact I’m with you. @SenSanders obviously has no respect for your work or the people you serve.

According to sources within a campaign event today, Bill Clinton also got in on the defense without calling Sanders out by name:

Bill Clinton knocking Bernie Sanders: “Hillary does not consider Planned Parenthood a member of the establishment…”

A few hours before appearing on Maddow, Sanders tweeted a pro-choice message that he deleted following the backlash against his Planned Parenthood remarks. It was preserved and disseminated through screenshots.

Clinton’s camp coming down on him for his remarks comes on the heels of arguments between the two candidates regarding healthcare and attacks against Sanders coming from Clinton’s campaigners, including her daughter.