Sanders Snaps Back at Cooper Over Castro Question: ‘Let’s Not Get Into Red-baiting Here!’ 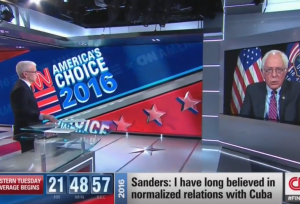 During CNN’s coverage of interviews with all five remaining candidates the night before state-wide primaries and caucuses in Utah, Arizona, and Idaho, Bernie Sanders took a grilling from Anderson Cooper on comments the candidate has made in his past about the Cuban government.

The self-described Democratic Socialist from Vermont was pressed directly by Cooper about a recurring topic from the most recent Democratic debate in which Hillary Clinton went after Sanders over praise he has given for the policies of former Cuban president Fidel Castro. As Sanders said Monday night that “normalized relations would be good” with Cuba — further crediting President Barack Obama‘s visit to Havana this week — he told Cooper emphatically not to draw too close a parallel.

“Look, Anderson — let’s not get into red-baiting here. Here is the truth, everybody knows it,” Sanders began. He continued, “Cuba is a very poor country. Its economy is in very bad shape. It is an authoritarian society. Do I support their economic policies or their political policies? Of course I don’t.”

Then Sanders, who trails Clinton in the delegate count substantively heading into Tuesday’s conventions, identified the heart of the praise that he has been on record giving to Cuba in the past:

“But you know what else? Cuba produces a lot of physicians in this country. And you know where they go? They go to poor countries around the world, doing a lot of good. I wish we had physicians in this country — the number of physicians that we need — to go to poor countries around the world. By and large, Cuba’s educational system, for a poor country, is pretty good. When [Fidel] Castro came to power, they did a lot to eliminate illiteracy in that country. So yes, you know, you don’t have to praise everything about Fidel Castro. It’s a dictatorship. It’s a poor country. But have some good things been done in Cuba? Yes.”

At one point during the exchange, Cooper asked Sanders directly to identify if he would take the next step in President Obama’s work this week: “Do normalized relations mean inviting Raul Castro to the White House?”.

Check out the above clip from CNN.
[image via screengrab]