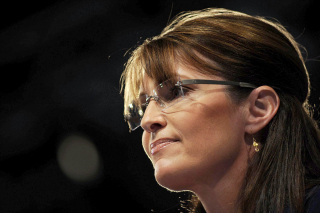 When she’s not thinking aloud about joining the cast of The View, former Alaska Gov. Sarah Palin is calling for the president’s impeachment.

In an EXCLUSIVE column for Breitbart.com, the Fox contributor likened the United States to President Barack Obama‘s metaphorical abused spouse.

The lede graf said it all:

Enough is enough of the years of abuse from this president. His unsecured border crisis is the last straw that makes the battered wife say, “no mas.”

Get it? It’s a Mexican border crisis, so the abused wife needs to say “no más,” not “no more,” because Spanish.

She continued her case with some labor economics that would make libertarians and HBO’s John Oliver cringe:

Because of Obama’s purposeful dereliction of duty an untold number of illegal immigrants will kick off their shoes and come on in, competing against Americans for our jobs and limited public services. There is no end in sight as our president prioritizes parties over doing the job he was hired by voters to do. Securing our borders is obviously fundamental here; it goes without saying that it is his job.

“Who’s looking out for the American worker? Who has their backs? Who fights for them?” she later asked. “We should.”

And then the conclusion:

It’s time to impeach; and on behalf of American workers and legal immigrants of all backgrounds, we should vehemently oppose any politician on the left or right who would hesitate in voting for articles of impeachment.

The many impeachable offenses of Barack Obama can no longer be ignored. If after all this he’s not impeachable, then no one is.

Read the full EXCLUSIVE column exclusively over at this very exclusive link.