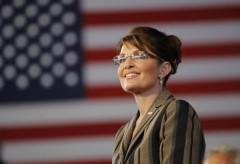 Palin herself has said she is following the blueprint that God has laid down for her; her political pathway is being lit by lamps supplied by the divine. Interpreting the deity is above my pay grade, so we’re left with asking whether Palin is lucky — in which case she will find herself in a precarious position when the hard campaigning really starts — or she is savvy, in which case she has a chance to win the Republican nomination.

That is Mark Ambinder (at his best) opining on whether Sarah Palin is merely “lucky, [or] she’s savvy, or she’s been blessed by God.” He sticks to what he knows and explains why he believes her success to be both the result of luck (namely, the Tea Party movement) and increasingly savviness.

The case for luck is simple: the tea-party movement happens to the slice of the American electorate that she talks to — middle-to-lower class white exurbanites over the age of 30. Folks who feel economic dislocation and blame it on intrusion, either by immigrants, diversity or Washington…Now let’s consider the case for Palin’s savviness. Number one: she is continuously underestimated, something she uses to her advantage. Expectations are very low.

I am inclined to lean more to the latter than the former, truth be told. Certainly the burgeoning Tea Party movement could not be a better fit for Palin but she preceded it; her initial blaze across the nation’s psyche began in the midst of Obama-mania long before anyone could conceive of a political world that included Tea Partiers as power players. Looking back she may have been a precursor but even if the movement hadn’t materialized I suspect she’d still be a power player, divine intervention or otherwise.

Meanwhile, Politico is explaining that, despite Palin’s many complaints about the ‘liberal media elite’ the MSM is actually in the thralls of a “love affair” with her (whether it’s the 4th grader abusive kind is not spelled out):

For the media, Palin is great at the box office. Among modern American political figures, she is second only to Barack Obama in generating clicks (for Web sites like this one) and ratings (for the cable news networks hungering around the clock for fresh material).

And there you have it. The evil media truth of the day: Palin is rescuing a struggling media from itself. And as long as she keeps up the “soundbite strategy” and as long as pageviews are the coin of the media realm, she will remain a force to be reckoned with. Regardless of whether or not she is actually electable in the end.