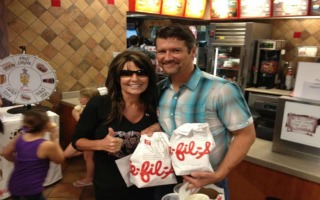 Just about every pundit or public figure of relevance has weighed in on the controversy surrounding comments made by the fast food chain Chick-fil-A’s CEO Dan Cathy regarding his support for gay marriage rights – or, rather, a lack thereof. The latest form of a proxy battle surrounding gay marriage comes in the form of either eating or not eating at the restaurant. On Saturday, former Vice Presidential candidate Sarah Palin made her opinions on the matter known by tweeting out a picture of herself and her husband, Todd Palin, eating at Chick-fil-A.

RELATED: Red Eye On Chick-Fil-A Controversy: YouTube Star Antoine Dodson Doesn’t Care And Neither Should You

Palin took to Twitter on Saturday to inform her more than 800,000 followers that she thinks Chick-fil-A is a “great business.”

Stopped by Chick-fil-A in The Woodlands to support a great business. fb.me/KM9ogGda

The tweet was followed by a series of invictives by people incensed by her support for this great business, which clearly is a stand in for “I don’t like gay people.”

“You get extra homophobe sauce on your sandwich,” asked one follower.

“You check for gays first,” inquired another follower.

“F**k both you & Chick fil-a! Hateful ignorant a**es,” noted yet another concerned citizen.

The comments on Palin’s Facebook page, where she posted a picture of her and her husband carrying two large bags of takeout from the restaurant, were far more supportive.