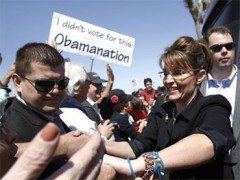 I guess this means Sarah Palin has a sense of humor. Also, a grasp of the English language that perhaps some had not previously attributed to her.

Last week a lot of people took Palin to (overblown) task for what they saw as a subtle attempt on her part to add to the extreme, post health care, language that some are speculating has encourage the recent spat of violence. Frank Rich also listed Palin in his Sunday column as an aggravator after a number of the districts she had “targeted” (she used a rifle crosshairs symbol to mark particular districts, four of which have now been vandalized).

Not one to be deterred, Palin followed up a weekend of well-covered speeches with this Facebook note, ostensibly about March Madness (the basketball kind).

To the teams that desire making it this far next year: Gear up! In the battle, set your sights on next season’s targets! From the shot across the bow – the first second’s tip-off – your leaders will be in the enemy’s crosshairs, so you must execute strong defensive tactics. You won’t win only playing defense, so get on offense! The crossfire is intense, so penetrate through enemy territory by bombing through the press, and use your strong weapons – your Big Guns – to drive to the hole. Shoot with accuracy; aim high and remember it takes blood, sweat and tears to win.

Focus on the goal and fight for it. If the gate is closed, go over the fence. If the fence is too high, pole vault in. If that doesn’t work, parachute in. If the other side tries to push back, your attitude should be “go for it.” Get in their faces and argue with them. (Sound familiar?!) Every possession is a battle; you’ll only win the war if you’ve picked your battles wisely. No matter how tough it gets, never retreat, instead RELOAD!

Emphasis hers. So kudos to Palin for having a sense of humor, I guess, and for continually understanding how to utilize her Facebook page better than anyone else out there. Of course, it’s a bit of a risky game, since should, God forbid, anything actually happen, it will, you know, not be funny at all.