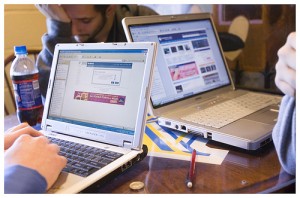 What role – if any – should a school play when a student badmouths a teacher online? That’s the question with which California’s Mesa Verde High School and the ACLU currently find themselves wrestling. The school suspended a student named Donny Tobolski after he took to Facebook to vent his frustrations about a teacher, calling the educator in question – biology teacher Mr. Cimino – a “fat ass who should stop eating fast food, and is a douche bag.”

Linda Lye, a staff attorney for the ACLU writing on behalf of the young man and his mother, wrote a letter to Tobolski’s principal, Rick Messer, letting him know that, by suspending Tobolski, he had violated the student’s federal rights. Writes Lye:

Donny’s speech was protected under the state and federal constitutions, as well as the Education Code. That being so, Mesa Verse High School’s suspension of Donny for his protected speech violates state and federal law. We take this matter seriously because of the special role of freedom of speech in our democracy. Schools, tasked with the important role of teaching our youth about civic engagement, send the wrong message when they fail to live up to our country’s founding principles.

Lye adds that Tobolski’s comment, which was written neither on a school computer nor during school hours, posed no risk of “materially or substantially disrupting the school environment.” Furthermore, the comment does not qualify as “cyberbullying” – a growing issue among the young and mean, and a form of bullying among peers subject to disciplinary action by schools – because it did not constitute as sexual harassment, a hate crime, or a threat.

Was Tobolski’s comment immature and disrespectful? Or course. But it would appear, according to Lye’s argument, that the staff at Mesa Verde High School were not within their right to take disciplinary action for a rude but harmless comment Tobolski made in the privacy of his home (…albeit in the public arena that is The Internets.) But we’d like to pretend to care about you all think: Should the school be able to suspend Tobolski for his comment that his biology teacher was an avid consumer of trans fats in addition to, allegedly, being a feminine hygiene product?