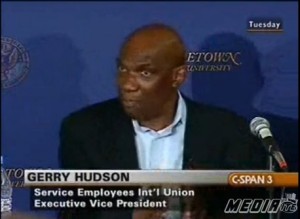 There’s a C-Span video clip of SEIU Executive Vice President Gerry Hudson being circulated in which he engages in some profanity-laced straight talk about building support, with workers, for immigration reform.  Some right of center websites seem to be pushing this clip viral, in an attempt to demonize unions, while promoting the “reverse racism” narrative that led Glenn Beck to call President Obama a racist, and led Obama’s opponents on a Geraldo-esque quest for a non-existent “Whitey Tape.”

They label the clip “SEIU President calls ‘white workers’ racist,” which would be a pretty disturbing thing for a union executive to say about his own membership.

Unfortunately,  that’s not what Hudson is actually saying.  He did say that something was “so f***king rabidly racist,” which calls into question the agility of C-Span’s “bleep” button operator, but Hudson was clearly referring to the rhetoric of  a particular subset of white workers, and not all white workers, as sites like Fox Nation would have you believe.

The conservative sites that are pushing this video are linking to this post, from Yid with Lid, who interprets Hudson’s remarks thusly:

Essentially he is saying that the black people he represents are all weak-minded idiots and the whites are all racists.  Gee that SEIU really has so much respect for its members:

Here’s a transcript of the relevant section:

“On white workers, I think we got some real problems. I’ve spent a lot of time in Wisconsin and places like that, where I have heard some of the most anti-immigrant sentiments around. It’s also, and this is where you get the black workers first, it’s so f***ing rabidly racist, ’til black people get scared. They don’t just mean you, right? So, you can organize them quicker, like, look at what’s there.”

What Hudson is saying is entirely reasonable. Is it a secret that strong anti-immigrant sentiment frequently intersects with racist rhetoric? His observation that such rhetoric would make black workers uncomfortable about joining that chorus is spot-on, and has nothing to do with thinking they’re “easy dupes.”

Of course, there is the matter of the profanity, but I think Vice President Joe Biden also ruined the big secret that Democrats don’t think it’s a big f***ing deal.

Still, this clip will surely continue to be circulated as proof that SEIU’s Executive VP thinks all white workers are racist, despite the fact that he clearly said no such thing.