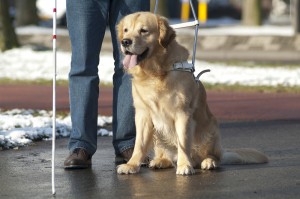 Between the woman who put a cigarette out in a reporter’s face and the Australian man who attempted murder with a bulldozer, people are terrible. Like really, really awful. Then again, you’re reading this on a political news site, so you already know this.

As bad as humans can be, however, dogs are simply the best. They might not hold a candle to the Internet’s fascination with cats, but they’re still pretty awesome. Like the service dog, Figo who threw herself in front of a mini-bus to save her blind owner:

When the service dog saw an oncoming mini school bus heading for Stone, the blind woman he was trained to guide, the golden retriever’s protective instincts kicked in: He threw himself at the closest part of the vehicle he could.

Figo, a golden retriever, suffered severe injuries to the right front leg. According to Brewster Police Chief John Del Gardo, Figo’s owner Audrey Stone is still “in Danbury Hospital on Tuesday, with a broken ankle and elbow and three fractured ribs.” Still, had the service dog’s instinct’s not kicked in, things could have been a lot worse.

Yet despite it all, Figo tried to comfort Stone throughout the ordeal. Stone, meanwhile, only wanted to know whether or not her dog was okay:

The driver of the bus, which was transporting two kindergartners to a nearby school, told authorities at the scene that he didn’t see them crossing the road until the moment of impact.

Dogs are awesome, but this begs the question: Would your cat do this for you? Didn’t think so.