Sex Bomb: Get Your Own Pin-Ups For Ron Paul Calendar

Sex Bomb: Get Your Own Pin-Ups For Ron Paul Calendar 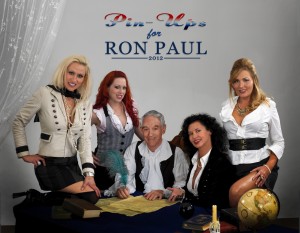 Fundraising master of disaster Ron Paul has just discovered a new, old wrinkle on his famed “money bombs,” Investor’s Business Daily‘s Andrew Malcolm reports that a group of bodacious Paul supporters has unveiled a charmingly anachronistic fundraising gimmick: a pin-up calendar. For just $24.95 (plus shipping), Ronulans can take home a year’s worth of kitschy, politically-themed tableaux that hearken back to a simpler time.

Libertarian icon Ron Paul enjoys an intensely loyal base of support that has kept him right in the middle of the Republican primary polls even as other, more mainstream candidates have slipped into oblivion. The twin pillars of Paul’s success are his consistently high performance in straw polls, and his uncanny ability to raise money, each testaments to the motivation of his army of supporters. It’s no surprise, then, that one group of such supporters would find a creative way to bring their assets to bear. From Andrew Malcolm:

So, Juliet (she’s the brunette in the cover photo above), got some pals together to brainstorm. She and Crystal, Dawn, Anabel, Jennifer, Tiffany, Dawn, Mara, Alana, Kathryn, Julia and Gina, libertarian ladies all, decided that taking off some clothes was the least they could do to help advance the Texas oldtimer’s GOP bid.

“In this battle for the hearts, minds and souls of men and women,” Juliet says with a twinkle in her voice, “I feel our best weapon may in fact be the sweet persuasions of aesthetics.”

Veterans of the 2008 presidential campaign will recall sexy viral video sensation Obama Girl, who did her part in spreading the message of Hope and Change, but never made a dime for then-candidate Barack Obama. Leave it to Ron Paul’s ardent, practical fans to monnetize the idea, in an appropriately retro fashion.

The calendar features campily staged photographic political cartoons (my favorite is Gina Dumania’s revolt against the FDA, which asks “Got Freedom?” as she prepares to down a glass of milk that the bottle indicates is “RAW”), each with fairly detailed bios in the margins, along with selected quotes from Ron Paul, and other historical figures.

The other takeaway from this story is that my old pal Andrew Malcolm, longtime proprietor of the LA Times‘ Top of the Ticket blog, has relocated to Investor’s Business Daily. In all of life’s hustle and bustle, I missed that bit of news. Malcolm told me, “I loved my ten-plus years at the LA Times, where editors asked me to invent my column in 2007. They were 120% supportive.”

Apparently, though, he got an offer he couldn’t refuse. “IBD made a wonderful offer to write there and help build traffic, as we did on LAT with our 67 million readers in 51 months. Same column, different address & Twitter handle (@AHMalcolm). So far (the new gig is) great fun.”