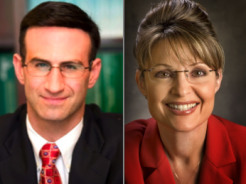 This goes to another obvious — and recurring — question: whether someone whose personal life has become so complicated is really fit to tackle one of the most demanding, important and stressful jobs in the universe. “Frankly I don’t see how Orszag can balance three families and the national budget,” wrote Joel Achenbach of The Washington Post…Oh, budget, schmudget. This is about one question above all others, and that is this: Is Peter-mania dead? Is he still a celebrity nerd?

— Mark Leibovitch in this weekend’s Sunday NYT Style section on the recent revelation that newly engaged, divorced father of two Peter Orszag, Obama’s Director of the Office of Management and Budget, recently had a love child with his former girlfriend.

Not only do we have a woman with five children, including an infant with special needs, but a woman whose 17-year-old child will need her even more in the coming months. Not to mention the grandchild. This would inevitably be an enormous distraction for a new vice president (or president) in a time of global turmoil. Not only in terms of her job, but from a media standpoint as well….Is she prepared for the all-consuming nature of the job? She is the mother of five children, one of them a four-month-old with Down Syndrome. Her first priority has to be her children. When the phone rings at three in the morning and one of her children is really sick what choice will she make?

Bit of a difference here, no? And yes I am aware that Sarah Palin, had she and McCain won the election, would have been a heartbeat away from the Oval Office and Peter Orszag is not. Moreover, shortly after Sally Quinn penned this Palin provided plenty of actual reasons to be concerned about her eligibility to be VP. But still. It’s impossible to imagine a woman being in a similar position to Orszag’s and getting similarly casual treatment. Just saying.