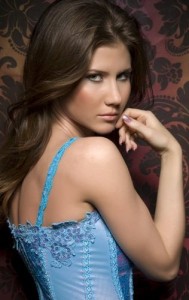 The capture of 11 alleged Russian spies on US soil yesterday is sure to be one of the most fascinating stories of the summer (even though, as a friend of mine suggested on Twitter, it’s probably just incredibly elaborate viral marketing for the Angelina Jolie movie Salt). We here at Mediaite, however, are going to go out on a limb and and guess the name you’re going to be hearing the most in the coming weeks is “Anna Chapman.” Why is that? Well, because Chapman is sexy and the phrase “sexy Russian spy” is the best headline bait to come along since “lesbian-themed bondage club.”

The New York Post was probably the first to jump headfirst onto the sexy spy train. In their article on the capture they focused almost entirely on Chapman and her sexy, sexy exploits. The article, entitled “Spy Ring’s ‘Femme Fatale,'” describes Chapman as a “flame-haired, 007-worthy beauty.” Come on, Post, Chapman is hot, but is she really Ursula Andress level?

The more reputable news sources had to be subtler in their inclusion of the Chapman hook (at least for now). Check out this otherwise straight-forward CBS story. Nothing too sexy there, right? Except for the clear choice to have a sexy Chapman picture make up the thumbnail image for the accompanying video.

Fox News used a similar tactic. This afternoon Megyn Kelly presented a very thorough report on the entire story. The video (which you can watch below) is a great sum up of everything that’s happened. However, someone in the control booth thought it would be a good idea to focus on a photo of Chapman’s steely gaze for 35 seconds while Kelly read off the details of the case.

Of course, we aren’t the first to pick up on the inevitable Chapman trend. The Village Voice’s Foster Kamer came up with a sure-fire traffic boon by seeking out Chapman’s Facebook profile and posting some of her sexier photos (it really puts the Time Square bomber’s profile to shame). Go ahead, click on through.

And check out the FNC segment here: