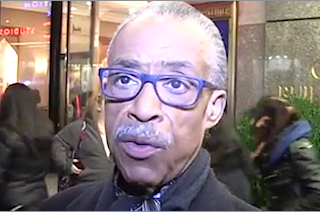 When Sony Pictures co-chair Amy Pascal said she had spoken to Al Sharpton on the phone about her racially-insensitve emails regarding President Barack Obama, it sounded like the pair had patched things up and would be moving forward. But as Sharpton revealed to TMZ Monday night, he is still considering a call for her resignation.

Following the major cyber-attack on Sony Pictures, hacked emails leaked between Pascal and producer Scott Rudin, in which they joked about what movies Obama might enjoy, such as Django Unchained and 12 Years a Slave. Both execs apologized for the comments, which were never intended to be made public, but Sharpton issued a harsh statement against them, comparing Pascal to disgraced L.A. Clippers owner Donald Sterling.

“I was very offended by the emails that were hacked,” Sharpton said, adding that he will be meeting with Pascal following their phone conversation along with the Urban League’s Marc Morial and the NAACP’s Cornell Brooks. “We’ll determine there whether we are going to join calls for her resignation or whether she is really, seriously going to deal with the fact that Hollywood really reflects a lot of what was said in that conversation,” he said.

“Right now, Hollywood is like the Rocky Mountains, the higher up it goes, the whiter it looks,” Sharpton added. “I don’t know who’s behind the hack, but I know what I read on the hack. And I’m going to give her a lot of heck about the hack.”