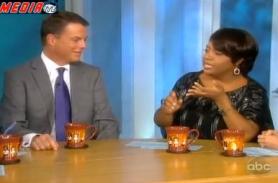 One person who Joy Behar did not say is going to hell today on The View is Fox News’ Shepard Smith, who was a guest on the program this morning.

Smith revealed he has a new three-year contract with Fox News, as well as the fact he’ll interview Sarah Palin for his first time on Election Night next week.

Smith announced he had “signed a new three-year deal” with Fox News – his current contract expires at the end of 2010. The news was first reported by Deadline.com. “I’m really proud of the journalism that comes out of our place,” he said. “We’ve never had a big mistake.”

Shep was very buttoned up when the talk came to his personal take on 2010 candidates, allowing himself to only say of Christine O’Donnell: “she’s good TV.”

He also revealed that, when he anchors FOX broadcast network’s election coverage Tuesday night, he will interview (his colleague) Sarah Palin for the first time. She’s notoriously protective about who she interviews – look for the sit-down with Shep to be one of the toughest recently. He described her current role as backer of candidates. “That’s what she told us on that very weird day, and that’s exactly what she’s done,” he said. (Here was that “weird day” – the day she quit – which takes us back to the very first ‘top story’ on Mediaite!)

Check it out, from ABC:

In making the announcement, Ailes said, “Shep is a rare journalist whose signature style leads the news industry while embodying the traits of great newsmen of past generations. His talent, passion and dedication to journalism is unmatched and we’re proud that he’ll continue in this role for many years to come.”

Smith added, “I look forward to my future at FOX News where Roger’s commitment to journalism has allotted me the freedom and resources necessary to execute the only one-hour newscast in cable news.”

Joining FNC at its inception in 1996, Smith anchors The FOX Report with Shepard Smith, which has served as the network’s signature evening newscast at 7pm since its debut in 1999. Under Smith’s direction, the program has been number one in its timeslot for more than 100 consecutive months, averaging 1.8 million viewers a night, and routinely beats CNN and MSNBC combined, according to Nielsen Media Research. In addition to his weeknight newscast, Smith anchors the afternoon news program, Studio B, which also ranks number one in its timeslot.

During his tenure at FNC, Smith has reported from both the Democratic National Convention and Republican National Convention for the 2008 presidential race. Additionally, he notably covered the approaching Hurricane Katrina and its aftermath from his native region; the Middle East conflict from the Israel-Lebanon border; 9/11 and the subsequent war in Afghanistan; Operation Iraqi Freedom; the Columbine school massacre, and President Clinton’s impeachment and trial. He was one of only two television correspondents to witness the execution of Oklahoma City bomber Timothy McVeigh in June of 2001.

Prior to joining the network, Smith was a Los Angeles based Fox News correspondent, reporting on a wide range of stories for the FOX affiliate news service, including the crash of TWA Flight 800, the Montana Freeman Standoff, and the Oklahoma City bombing. Before this, Smith gained extensive local news experience throughout the state of Florida, reporting for WSVN-TV (FOX) in Miami, the former WCPX-TV (CBS) in Orlando, WBBH-TV (NBC) in Fort Myers, and WJHG-TV (NBC) in Panama City, where he began his television career.