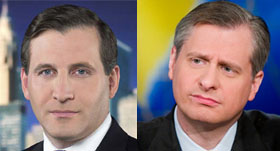 A serious journalistic query should an intrepid reporter want to follow this lead: has anyone seen Newsweek editor Jon Meacham and WNBC investigative journalist Jonathan Dienst in the same room? Sure, they come from completely different media backgrounds and, save for both making occasional appearances on MSNBC, have little professional overlap. But we can’t help but look at the photo evidence and wonder whether something is up?

There are two possible theories: one, the more obvious, is that an unfortunate hospital snafu has denied them both of a lifelong bond with their twin brother. It’s happened before! But it’s just too simple of a solution. The other, more likely scenario is that one of either Meacham or Dienst are the creation of the other, and their mutual existence is a nefarious plot to receive more airtime (and awards—“Dienst” has an Emmy and “Meacham” a Pulitzer under his belt) on the premise that they are two separate people. Think about it: the biggest physical difference is mostly a matter of expression– and, yes, most photos seem to show them alternatively looking trusting and questioning the object of their attention. Plus, “Jon(athan)” didn’t even bother to get creative with the first name! Nice try, Jon, whoever you are. We’re onto you.

Have you any suggestions for other “siamediaite twins” – you know, media professionals who look like they were separated at birth could be long lost twin siblings? Send suggestions to tips@mediaite.com.