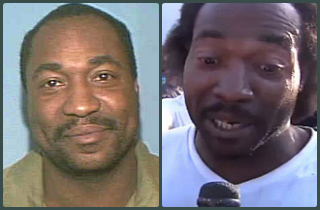 While much of the media celebrates the candor and charisma of Charles Ramsey, the Cleveland man who reportedly helped Amanda Berry escape from her kidnappers’ home earlier this week, the Smoking Gun has unearthed documents showing not all is peachy keen with the newfound celebrity “hero.”

According to the investigative site, Ramsey is a convicted felon, who has been jailed on three separate domestic violence convictions. His marriage apparently ended in divorce after a 2003 felony conviction for battering his ex-wife Rochelle.

The domestic violence cases apparently were consolidated for sentencing in August 1998, when Ramsey was ordered to serve six months in jail, placed on five years probation, and directed to attend a domestic violence counseling program.

Following his release from custody, Ramsey violated probation terms, according to an April 1999 court docket entry. While an arrest warrant was issued for Ramsey, it is unclear from court records whether it was executed before both misdemeanor cases were formally closed several years later.

Ramsey was again busted for domestic abuse in January 2003. He was subsequently indicted for felony “domestic violence with prior conviction,” a reference to his previous abuse cases.

[…] After pleading guilty to the felony abuse charge, Ramsey was sentenced to eight months in prison and ordered, following his release from custody, to be placed on “post release control” supervision for the maximum term allowable by Ohio law.

Ramsey served his time at the Lorain Correctional Institution, where he posed for the above 2003 mug shot. He had previously done two separate one-year stretches at Lorain, for early-90s convictions for drug abuse, criminal trespassing, and receiving stolen property.

In her divorce filing, Rochelle — now remarried — reportedly accused Ramsey of “gross neglect of duty” and “extreme cruelty.” Years later, she claims she is on an “okay” basis with her ex-husband, but their daughter, now 15 years old, is not particularly fond of the man.

This all goes to show that, as Al Sharpton asserted, even an imperfect man can be a hero.

Read the full report plus the court documents here.