What Is a Chokehold?
VIDEO

So What Is the Exact Definition of a Chokehold? 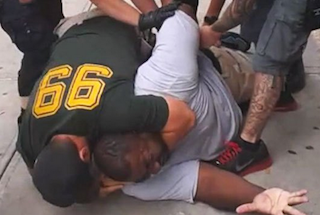 With the grand jury decision in the Eric Garner case has come a lot of confusion about what exactly constitutes a “chokehold” and whether that maneuver was used to subdue and ultimately kill the 43-year-old Staten Island man this past summer. Despite the fact that chokeholds have been banned by the NYPD and other major police departments, the grand jury decided not to bring charges against Officer Daniel Pantaleo in this case.

According to the New York Law Journal, the NYPD first put limits on the use of chokeholds when Commissioner Benjamin Ward issued the following order in 1985:

1. Effective immediately, choke holds, which are potentially lethal and unnecessary, WILL NOT be routinely used by members of the New York City Police Department.

Eight years later, in 1993, the department issued an outright ban on chokeholds, adding this passage to its patrol guide after Federico Pereira, as suspected car thief, died of “traumatic asphyxia” while in police custody:

Members of the New York City Police Department will NOT use chokeholds. A chokehold shall include, but is not limited to, any pressure to the throat or windpipe, which may prevent or hinder breathing or reduce intake of air. (Emphasis added)

“We are in the business of protecting life, not taking it,” Chief John F. Timoney said at the time. “We’re in the business of officer safety. The bottom line of the whole thing is that if somebody is emotionally disturbed they really need police help and we should render it in the most humane and professional way possible.”

Summing up the gist of the new regulation, he added, “Basically, stay the hell away from the neck. That’s what it says.”

And here’s how the NYPD patrol guide defined a chokehold, as recently as 2004:

A chokehold shall include, but is not limited to, any pressure to the throat or windpipe, which may prevent or hinder breathing or reduce intake of air…

Whenever possible, members should make every effort to avoid tactics, such as sitting or standing on a subject’s chest, which may result in chest compression, thereby reducing the subject’s ability to breathe.

But as the Washington Post discovered, civilian complaints against police officers involving chokeholds have averaged close to 200 per year in New York City over the last 13 years: 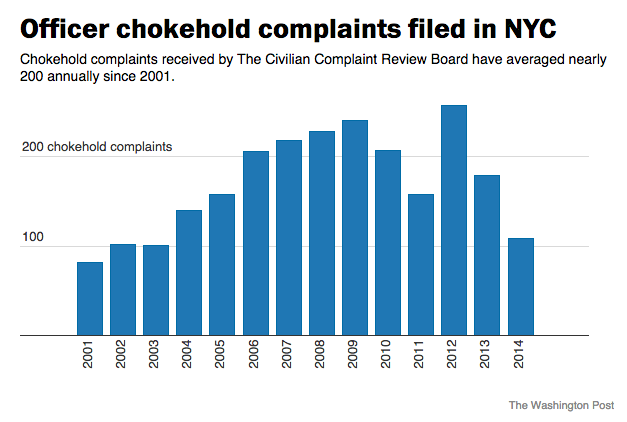 As many pundits have pointed out over the last few days, chokeholds may be against NYPD policy, but they are not, in and of themselves, “illegal.” That is why the grand jury was able to let the officer go without an indictment even though the chokehold he performed ended up killing Eric Garner, who was asthmatic and repeatedly said “I can’t breathe” as the cops were trying to subdue him.

He could, however, face punishment from the police department. On Thursday, one day after the non-indictment, the NYPD announced its own internal investigation into Pantaleo’s actions. And during a press conference, Commissioner Bill Bratton said he was unsure if the officer would ever return to duty with the force.

Watch the original cell phone video of Officer Pantaleo using the chokehold on Garner below: