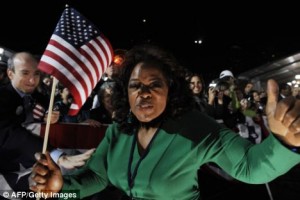 Is Oprah’s America a weaker America? Does redemption that comes easily, without major atonement, send a message that transgression is no big deal, and wind up encouraging self-destruction?

— Robert Wright at the New York Times speculates that Oprah Winfrey is to blame for the moral loosening of America, in particular those of Tiger Woods, because we are now a nation that believes there are no hard repercussions for bad behavior.

Wright is obviously not the first to blame Oprah for any myriad of things, not the least of which is her new-agey, best-life-now philosophy. But “weaken” is an interesting adjective in so far as it insinuates “national security.” As in, Oprah is somehow responsible for making America less safe. And to that end here’s the other part of the column that caught my attention.

Malamud was writing [in The Natural] in a pretty Calvinistic America. Back then if you were playing a word-association game and someone said “sin,” you were at least as likely to think “damnation” as “forgiveness.”

“Back then” appears to be a time that Wright prefers to the consequence-free now. You know who else is always talking about how much better “back then” is? Glenn Beck.

Beck, of course, also likes to preach redemption…the hit rock bottom give yourself up to the greater power kind (as evidenced in his CPAC speech). He also wields an Oprah-like power over book sales of sorts, and has taken to hosting great big lifestyle events. If America, or merely Robert Wright, is looking for a less tolerant replacement to the Oprah lifestyle dynasty, they may not have to look far. Different decade, different guru.