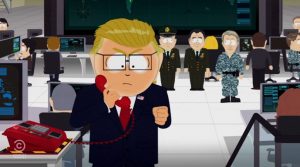 South Park took on Donald Trump yet again Wednesday night, imagining how the President-elect might make major global decisions based on his anger at being criticized.

TrollTrace is about to expose the online history of everyone on Earth, which causes the cartoon town to lose all sense of hope over the chaos that will inevitably ensue. In time, Kyle Broflovski convinces everybody that there’s still one option they can try: convince Trump substitute Mr. Garrison to destroy the Danish before they launch the program.

Garrison’s advisers try to help him address the continued global destabilization, but there was no way the president could resist taking a call from his boy toy and ex-lover, Mr. Slave. Garrison realizes that bombing Denmark would have major diplomatic consequences, but after enough goading about how he’s a “pussy-ass bitch,” he decides to give the order to wipe out the country.

Eventually, Kyle realizes that his father has been taken prisoner in Denmark over his trolling, so he calls Garrison to get him to change his mind. Broflovski challenges Garrison by saying he’s too much of a “little retarded sh*t-bitch” to resist, so Garrison decides to show restraint and call off the missiles.

While all of this is happening, TrollTrace chairman Lennard Bedrager reveals his true goals. As he observes that people can gain power by being incendiary, Bedrager suggests that he would start a world war because it would be the ultimate act of trolling to show how “everyone on Earth is a giant troll too.”