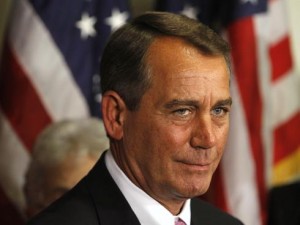 The mainstream media, and even some in the liberal opinion media, have completely missed the point of President Obama‘s dust-up with Speaker John Boehner over the date for Obama’s address before a joint session of Congress. MSM yakkers have advanced the “pox on both their houses” meme, while liberals like Ed Schultz accuse the President of “caving,” all ignoring the fact that Boehner has insulted and disrespected the office of the President of the United States, and should resign.

There are competing narratives in this story, but also a common set of facts. From the Republicans’ point of view, President Obama made a “rude,” presumptuous, politically calculated request to address Congress on the night of the Republican debate, and Speaker Boehner was absolutely justified in putting him in his place.

The White House narrative is that the Republicans have been relentlessly braying for the President to put forward a plan to create jobs, and announced weeks ago that he would do just that upon Congress’ post-Labor Day return to DC. Considering the urgency of this problem, as Republicans have loudly attested to, an overlap with one of many political campaign debates simply didn’t register. According to Carney, the conflict with the debate was pure coincidence, and not an attempt to offend Nancy Reagan.

Both parties agree that the White House consulted Boehner’s office prior to making the request, and no objections were raised. According to Jay Carney, this was done about an hour-and-a-half before the request was made public, and Boehner’s office has not refuted this. They also admit to having received the letter fifteen minutes before it was released to the public, and again, they raised no objections.

The truth in these competing narratives is probably somewhere in the middle. The timing of the Republican debate was probably at least a bonus, but selecting Congress’ first day back probably had a lot more to do with shielding the President from complaints of a lack of urgency. Frankly, since the White House announced a post-Labor Day speech weeks ago, I always assumed it would be on congress’ first day back.

Let’s give Republicans every benefit of the doubt. Let’s say the White House made their request in the most arrogant, uppity fashion imaginable, and said, “Hey, BONER, you wingers have been bitching up a storm about hearing our plan, so we wanna do this your first day back, so you pricks don’t have a sliver of daylight to claim the President is dragging his feet, or something. Yeah, we know you have a debate that night, but you can push that back a few ticks, mmkay? Haven’t you mouth-breathers heard of the DVR?”

You might not like that request, but it was made in private, in the customary manner, and was completely in bounds. If you want a friend, get a dog, but governing politics is a ruff business.

The time to raise an objection to the date was when the White House first contacted Boehner’s office, the following hour-and-a-half, or even in the fifteen minutes between when they received the letter, and when it was made public. Waiting several hours to send a refusal letter was a calculated decision, designed to disrespect and embarrass the President. Let’s grant that his hypothetical heads-up was the worst provocation imaginable. It was made in private, and the Speaker’s public response was an unprecedented insult to the office of the President of the United States.

As for people like Ed Schultz, who accuse the President of “caving” to Boehner, this is like accusing Newton’s apple of “caving in” to gravity. The President can’t address a joint session of Congress without a concurrent resolution, which Boehner well knew. Rather than handle this the way Speakers always have, like a man, face to face, he made a conscious decision to put Barack Obama in his place by making a public refusal.

This isn’t the first unprecedented Republican insult to the presidency under Barack Obama (but it is, by far, the worst), and it isn’t even the first time John Boehner has tried to make the President “heel” with his datebook. It ought to be the last. Every American who  has an appropriate respect for the office of the presidency should demand that John Boehner resign, and every legislator should amplify that demand. The problems facing this country are too great to be left in the hands of someone with such contempt for its highest office.

The media, meanwhile, ought to abandon its fetish for false objectivity, and recognize the facts. All parties agree the President gave the Speaker sufficient notice, and I cannot think of another president in history whom the media would suggest should have been preempted by a routine political debate, certainly not in a time of national crisis. The media is complicit in the insult through its failure to recognize this.