Starbucks Has New Dress Code that Allows for ‘Personal Expression’

Starbucks Has New Dress Code that Allows for ‘Personal Expression’ 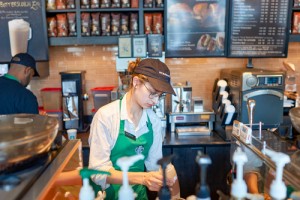 Starbucks made a major announcement this week: They have a new dress code that allows baristas to “shine as individuals while continuing to present a clean, neat, and professional appearance.” The new guide serves as a loosening to the requirements in order to allow baristas to express themselves. Employees are now allowed to vary up their black, white, and khaki clothing. But, don’t get too carried away, colors must still be ‘subdued.’

In a 15-page Starbucks Dress Code look book, the company gives you the do’s and don’t’s of what to wear. Wrinkle-free is a must . Your name tag should be written cleanly with ‘personality.’ In addition, if hair color is your style, Starbuck says ‘it’s welcome.” But, the company is still staying a bit conservative, the book says exposed shoulders, plunging necklines and t-shirts are still major “no-no’s”

As far as shoes, on the No List are UGG- style boots, open backed clogs, canvas shoes, and sandals.  However, thank goodness, Fedoras are allowed- as long as you don’t wear one with a pattern. Baseball caps remain a big No-No — but, of course, Starbucks hats are welcome.

As far as the reception, it seems to be pretty positive thus far: