Supreme Court Strikes Down Most Of Controversial Arizona Immigration Law 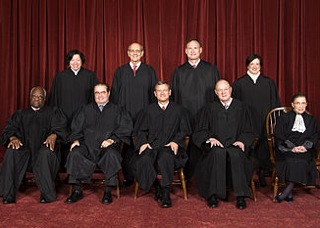 The Supreme Court delivered a mixed response to controversial Arizona immigration law SB 1070 this morning, striking down many of the laws provisions but not ruling on the most controversial one– allowed law enforcement officers to check for identification during stops. In Arizona v. United States, the Court’s decision, written by Justice Anthony Kennedy, has overturned most of the law– the parts that allow for warrantless search and arrest of those suspected to be illegally in the country– but not the Arizona police’s ability to now contact the ICE and check the immigration status of anyone they stop on other pretenses.

Justice Kennedy wrote for the Court (in this case, Justices Sotomayor, Breyer, Ginsburg, and Roberts), arguing that Arizona had much to be worried about in terms of crime in the illegal immigrant sector. Noting that there was an extensive body of federal law regarding who could be removed from the country for not being legally here, Justice Kennedy writes that certain provisions of the law “violates the principle that the removal process is entrusted to the discretion of the Federal Government.” In addition to the federalist concerns, Justice Kennedy writes that certain provisions that allow for stopping people based on immigration suspicious only could result in “unnecessary harassment of some aliens (for instance, a veteran, college student, or someone assisting with a criminal investigation) whom federal officials determine should not be removed.”

As for the bit about checking people’s status tangentially in stops for other legal situations, Justice Kennedy writes this is something the federal government has actually encouraged, and so doesn’t defy Congress:

Congress has done nothing to suggest it is inappropriate to communicate with ICE in these situations, however. Indeed, it has encouraged the sharing of information about possible immigration violations. See 8 U. S. C. §1357(g) (10)(A). A federal statute regulating the public benefits provided to qualified aliens in fact instructs that “no State or local government entity may be prohibited, or in any way restricted, from sending to or receiving from [ICE]information regarding the immigration status, lawful or unlawful, of an alien in the United States.” §1644. The federal scheme thus leaves room for a policy requiring state officials to contact ICE as a routine matter.

For law nerds, the good news is that Justice Antonin Scalia wrote a scathing dissent, where he explains that many of the state constitutions were written with the express intent of keeping out unwanted non-residents, thus giving power vested in the sovereignty of a state for them to act to keep people out, even in cases where the federal government has acted deliberately with regard to the topic:

The Constitution gives all those on our shores the protections of the Bill of Rights—but just as those rights are not expanded for foreign nationals because of their countries’ views (some countries, for example, have recently discovered the death penalty to be barbaric), neither are the fundamental sovereign powers of the States abridged to accommodate foreign countries’ views. Even in its international relations, the Federal Government must live with the inconvenient fact that it is a Union of independent States, who have their own sovereign powers. This is not the first time it has found that a nuisance and a bother in the conduct of foreign policy.

Watch the initial report of the Supreme Court decision via CNN below: