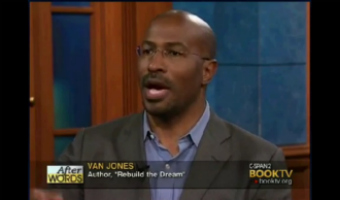 In what may be the most unintentionally accurate summation of how political partisanship works, former Obama green jobs adviser Van Jones recently told C-SPAN’s Book TV that he didn’t protest during the 2010 BP oil spill because Barack Obama was president. Jones also admitted that had John McCain or George Bush (or, we can assume, any Republican) been president during the disaster, “I’d have been out there with a sign protesting.”

When the oil spill that happened in the spring of 2010, there was another moment to say, “Hold on a second, let’s re-look at energy policy in America. Should we be subsidizing companies that are risking our health immediately and in the long-term?” We didn’t do it. You’ve never seen the environmental movement more quiet during an oil spill. I guarantee you if John McCain had been president, with that oil spill, or George Bush had been president with that oil spill, I’d have been out there with a sign protesting. I didn’t, because of who the president was.

Pretty much the greatest unintentional description of partisan hackery since…ever. When people so closely identify with party politics and their leaders, then most issues become “My Idiot vs. Their Idiot,” instead of the actual questions at hand. Take, for instance, how much of the anti-war movement has suddenly disappeared since Obama took office, despite his policies mirroring many of Bush’s.

However, Jones does go on to say that he regrets the partisan blinders he once wore:

Hindsight is indeed 20/20, Mr. Jones. Once a Republican is back in office, you’ll be back at it again…protesting for the very same reasons you would have — but didn’t — under Obama.

And I’m sure the staunchly anti-war liberals who’ve suddenly gone silent under Obama will bemoan their silence once a conservative hawk is back in the Oval Office, parroting the same exact policies but with a distinctly Republican spin.

Clip below, via C-SPAN: