T.P. Carney: Gingrich Is A Non-Lobbyist Only By Same ‘Narrow Definition’ Obama Uses 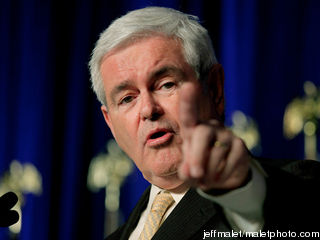 Gingrich, as you likely are aware, is in the hot seat over whether his role at Freddie Mac constituted lobbying, to which Gingrich has firmly maintained that he “never done lobbying at any kind.” However, in an op-ed piece for his paper, Carney draws specific attention to Gingrich’s past gig as a paid consultant for the Pharmaceutical Research and Manufacturers of America, the prescription drug industry’s lobbying group.

“So we know he was paid consultant for drug makers,” writes Carney. “That’s the first criterion for being a drug lobbyist.” The second criterion? Gingrich did more than simply offer his services as a consultant. Multiple former Republican congressional staffers confirm that he also reached out to and met with lawmakers on the Hill in an attempt to convince his wary fellow conservatives to support a bill expanding Medicare to include prescription-drug subsidies.

And it’s not as if Gingrich is the only politician responsible for toying with the definition of “lobbyist:”

So Gingrich can be considered a non-lobbyist only by the same narrow definition of “lobbyist” President Obama uses: someone registered with the House and Senate under the Lobbying Disclosure Act. This is how Obama can claim to reject lobbyist contributions while taking money from vice presidents of government affairs and the like.

But, Carney adds, there is one “out” for Gingrich:

His only conceivable out: Yes, he was a consultant helping drug companies pass this bill, but when he was persuading conservatives to back the bill, that was on his own time, and out of his own personal convictions — and it had nothing to do with the drug industry cash he was receiving at the time.