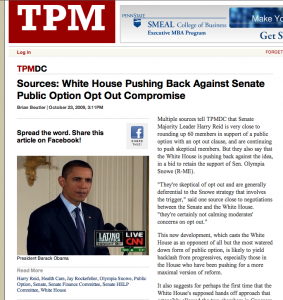 As far as TPM posts go, there didn’t seem to be anything wrong with the story, which began “Multiple sources tell TPMDC that Senate Majority Leader Harry Reid is very close to rounding up 60 members in support of a public option with an opt out clause …”

But Harvard’s Nieman Journalism Lab noticed that TPM was taking an unusual amount of criticism for the story’s use of anonymous sources. Aside from the headline and the lede, the post later attributes a quotation to “one source close to negotiations.”

Most of the commenters who took exception with this particular story complained that anonymously sourced stories rarely prove to be accurate. Others waxed cynical about the state of journalism and reporting. A few examples:

Experience has taught me to doubt anything that comes out of the mouths of these anonymous staffers because the overwhelming percentage of the time, what they say turns out to be complete bullshit.

That said, it looks to me that we have conflicting reports (again), hanging on anonymous sources (again), without much insight into the wider context of the negotiations and fundamentally at odds with other things that are in the president’s self interest. The pattern is familiar, as is the swift “clarifications” that come from the WH repudiating the reporting. Fortunately today, there are so many items in motion that the next rumor being floated will occupy our attention.

Okay… How many of these anonymously sourced stories are we going have to endure? First, the PO is off the table. Then it’s on. Then there are the votes for it. Then there aren’t.

It’s madness! We keep getting anonymous stories like this, only to have them knocked down by principals who are actually directly involved in pulling these bills together.

I not yet seen one of these “sources say” stories that is actually correct.

There seems to be too many moving parts right now — so many that the people who are directly involved are still trying to gauge exactly where the votes are.

And the end of the day, we have no idea what’s really going on, and the tales spread by anonymous sources are not going to give us any further clue. (Hey – “journalists”! Anonymous sources lie all the time!)

Media critic Jay Rosen, however, hit the nail on the head, writing “Why do we need you to be Politico?” And Politico, which has brought the rigor and integrity of hard-nosed political reporting from print to the web, might be the perfect counter-example. TPM, for its part, has brought the utility of Web reporting to politics. And to great success.

As frustrating as it may be to read this brand of speculative reporting on such a nuanced and sensitive issue as Executive and Legislative back-and-forth over health care reform, there’s something to be said for being quick to publish and seeing what sticks. This is actually an example of the TPM reporting model working at its best: wonky readers calling foul on anonymously reported stories that don’t seem to hold water.

Related: 25 Need-To-Know Bloggers You May Not Know Already — Josh Marshall