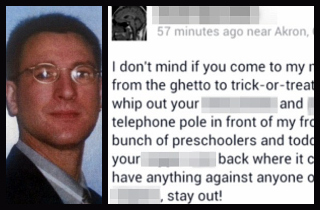 An Ohio high school music teacher has been put on paid administrative leave after admitting to posting an alleged racist rant on his Facebook decrying “ghetto” trick-or-treaters who swarm the neighborhood on Halloween.

The teacher, David Spondike instructs the orchestra at Firestone High School in Akron, Ohio. His racially-tinged rant was made known to school administrators after an anonymous tipster sent in photos of an expletive-laden Facebook rant.

The original post in question read: “I don’t mind if you come from the ghetto to trick or treat. But when you whip out your teeny dicks and piss on the telephone pole in front of my front yard and a bunch of preschoolers and toddlers, you can take your nigger-ass back where it came from. I don’t have anything against anyone of color, but niggers, stay out.”

Screengrab below, as blurred by news outlets: 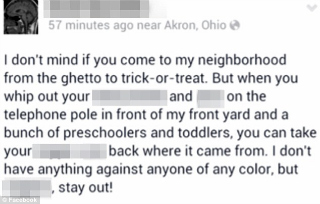 According to Akron School Superintendent David James, the remarks were specifically aimed at a teenager who exposed himself and urinated in front of young children this past weekend in Spondike’s neighborhood of Copley Township.

The teacher followed up that post with another message, clarifying that he “welcomes people who come from dangerous neighborhoods to mine, so their children can safely trick or treat.” However, he warned, bad behavior will not be tolerated.

‘Your [sic] are a CRIMINAL and are not welcome in my neighborhood and you should not be welcome in your own!” he wrote. “THAT IS WHY YOU HAVE COME TO MINE TO TRICK OR TREAT. Do not treat my neighborhood like you do your own. I HAVE THE RIGHT NOT TO BE LIKE YOU.”

He also explained to his Facebook friends that his earlier comments were not racist because of how common the N-word is used by “black people” at his school. “Racism is racism and to allow one race to use [a] word and not another IS racist. What I said was absolutely NOT racist by any stretch of the imagination,” he wrote.

Despite reportedly receiving glowing evaluations for his teaching, Spondike has apparently been subject to numerous investigations in the past, including the time a fellow teacher claimed he reprimanded him for “not doing anything to a student with very baggy pants.” Spondike later apologized.

Watch a report below, via WKYC: