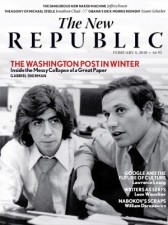 There’s no argument that brand name newspapers have undergone huge shifts in recent history. We’ve read David Carr‘s estimation of partisan changes at the Wall Street Journal, and countless reports and predictions about the future of the New York Times.

Now, the next issue of The New Republic dedicates its cover story to evolution at the storied Washington Post under the new reign of Katharine Weymouth and Marcus Brauchli. According to an excerpt posted by Michael Calderone at Politico, the story uses “interviews with approximately 50 current and former Post staffers” and “tells the story of the internal conflicts that have unfolded at the paper in recent years.” Here’s the full teaser via Politico:

“It’s no secret that The Washington Post has had a rough few years. From financial struggles to ethical controversies to bureau closings to buyouts of top reporters to the death of its book review section to the rise of a dogged competitor in Politico, the Post has often seemed beset by bad news. In our latest cover story, media reporter Gabe Sherman takes readers inside the Post’s struggles with a fascinating account of the paper’s turmoil. Drawing on interviews with approximately 50 current and former Post staffers, Gabe tells the story of the internal conflicts that have unfolded at the paper in recent years. He provides a detailed look at the paper’s two relatively new leaders – Katharine Weymouth, promoted to publisher two years ago, and Marcus Brauchli, the executive editor she chose to lead the newsroom. And he offers a persuasive theory for the Post’s problems: Unlike The New York Times or The Wall Street Journal, it hasn’t been able to settle on an identity. “

We’ll have more when the piece surfaces online.