Ten Years Later, The Y2K Hysteria Is Even Funnier With Age
video

Ten Years Later, The Y2K Hysteria Is Even Funnier With Age 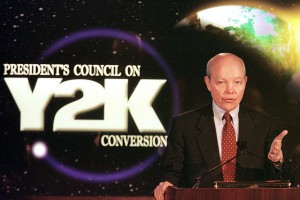 Exactly ten years ago, we were recovering from ringing in the new millennium in style — with Prince‘s 1999 song ironically cued up throughout our homemade party mixed tapes (burning CDs and iPods were not yet on the scene.) But this wasn’t just any New Year’s Eve — this was the night when we escaped the ghosts in the digital machine who threatened to get their collective revenge on a civilization grown lazy with technological advances. How did they plan to attack? Via the mysterious and scary computer glitch known as Y2K!

But it wasn’t all fun and games 10 years ago. New York city residents had heard of rumored attacks led by a relatively unknown (at the time) terrorist name Osama bin Laden. The fear then, though, was some sort of nerve gas: true story, I had a neighbor that had taped heavy duty plastic over their windows in case there was such an attack. Of course, this was blissfully in a pre-9/11 era, so no one took these threats that seriously (except my neighbors of course.)

But the real concern of the time was the computer glitch that promised to have elevators and airplanes drop like bricks from the sky. Sounds funny today, but ten years ago, it was a very real concern. Need proof of the paranoia? Watch the unintentionally hilarious video hosted by Sci-Fi legend Leonard Nimoy. The clip is from a program called Y2k Family Survival Guide, and yes, you can still purchase it (on VHS) at Amazon.