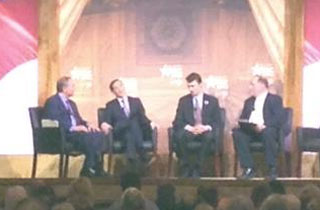 The most dramatic moment of CPAC might not be in any of the speeches, but in a debate over Edward Snowden that just wrapped up and, according to eyewitness, was nothing short of contentious.

The debate, entitled “The Death of American Privacy: Does it Matter if the Government Records Every Phone Call, E-mail and Text You Send?”, was bound to be controversial, but the below tweets from reporters and attendees indicate that it was fraught with tension. Ex-governor Jim Gilmore (R-VA), arguing on behalf of the NSA, drew both cheers and boos from the deeply divided audience (along with one “You lie!”) when he called Snowden a “traitor” and a “coward.”

While the topic was obviously controversial, no one predicted how heated the debate between Gilmore, lawyer Bruce Fein, and activist Charlie Kirk would get, nor that the audience would respond in kind. “[It] might go to fisticuffs,” quipped an audience member.

Some of the tweets are below, and we’ll update with video once we get it.

This privacy panel is interesting. 2 of the 3 think #Snowden did a good thing. 1 thinks he is a traitor. Might go to fisticuffs. #CPAC2014

Jim Gilmore calls Snowden "a traitor, he's also a coward." Illicits boos and some cheers from the crowd. #CPAC2014.

Gilmore is constantly getting heckled. The Paulites are out in force. #CPAC2014

Gov. Gilmore looking like an establishment politician with way too much confidence in government — not a good look. #CPAC2014

Jim Gilmore vs. Bruce Fein has been one of the more entertaining parts of #CPAC2014

Mixed reaction from conservatives on Snowden. Most of the audience thinks he is not a traitor.#CPAC2014 #TKCPAC

Watch the full panel event below: