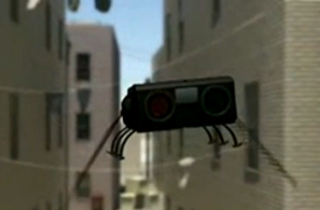 Looks like we have the makings of a new arms race at hand. The winner will develop the tiniest lethal drone capable of blending into a crowded cityscape.

The Atlantic‘s Conor Friedersdorf points to a National Geographic piece on the future of drone technology, including one fascinating passage on how the U.S. Air Force is developing “micro-drones” the size of tiny creatures, capable of flying through major cities unnoticed.

The science writer, John Horgan, described what information he was able to access from the government:

The Air Force has nonetheless already constructed a “micro-aviary” at Wright-Patterson for flight-testing small drones. It’s a cavernous chamber—35 feet high and covering almost 4,000 square feet—with padded walls. Micro-aviary researchers, much of whose work is classified, decline to let me witness a flight test. But they do show me an animated video starring micro-UAVs that resemble winged, multi-legged bugs. The drones swarm through alleys, crawl across windowsills, and perch on power lines. One of them sneaks up on a scowling man holding a gun and shoots him in the head.

I share Friedersdorf’s sentiment that this video is “horrifying” — namely because it signals that drone warfare is the next arms race.

According to Horgan, however, the U.S. government “takes seriously” the potential for widespread proliferation of “micro-drone” technology among terrorists and governments:

What, one might ask, will prevent terrorists and criminals from getting their hands on some kind of lethal drone? Although American officials rarely discuss the threat in public, they take it seriously.

[…] Exercises carried out by security agencies suggest that defending against small drones would be difficult. Under a program called Black Dart, a mini-drone two feet long tested defenses at a military range. A video from its onboard camera shows a puff of smoke in the distance, from which emerges a tiny dot that rapidly grows larger before whizzing harmlessly past: That was a surface-to-air missile missing its mark. In a second video an F-16 fighter plane races past the drone without spotting it.

The answer to the threat of drone attacks, some engineers say, is more drones.

In other words: another arms race to find the smallest possible drone that can not only attack the enemy but defend against similarly undetectable micro-drones. Rather than discourage this race to the bottom, we are actively leading the charge.

Moreover, the development of these fascinatingly small weapons provides yet another secretive weapon for the military to use without any sort of oversight.

Yes, in a world with micro-drones, casualties of American drone strikes will likely decrease, given that we’d be directly killing targets rather than obliterating them and everything around them with a missile from the sky. But the possibility for such precisely targeted surveillance and assassination, at the hands of a virtually-untraceable little “bug,” gives our government one more tool to easily evade supervision and accountability.

Watch the video Horgan described, below via: