The Blaze’s Buck Sexton In Explosive Exchange With Boston Suspects’ Aunt: ‘Two Terrorists: One Down, One To Go’
audio

The Blaze’s Buck Sexton In Explosive Exchange With Boston Suspects’ Aunt: ‘Two Terrorists: One Down, One To Go’ 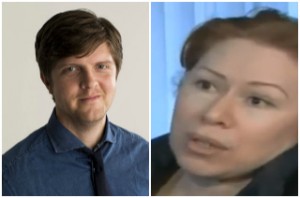 The Blaze’s Buck Sexton, who worked with the Central Intelligence Agency and the New York Police Department’s counter-terrorism intelligence unit, has extensively covered the Boston bombing story throughout the week. Listeners of The Buck Sexton Show were in for a surprise during Sexton’s radio show Saturday afternoon when a woman claiming to be suspects’ aunt, Maret Tsarnaev, called in. Tsarnaev made headlines Friday by publicly expressing doubts that her nephews’ committed the acts attributed to them and implying they are being framed.

The call soon spiraled into an explosive exchange:

SEXTON: “I have to ask you… You have doubts about the guilt of your two nephews, is that what you’re telling me now?”

TSARNAEV: “It’s not even doubts. I strongly believe these boys are innocent.”

TSARNAEV: “If that happened, why don’t we have any materials that can be shown to people?”

SEXTON: “We have tons of material! We have photos, we have eyewitnesses!”

SEXTON [with Tsarnaev repeatedly interrupting]: “We have surveillance footage! We have the dead body of one of your nephews who was in a shootout with police. He had an IED strapped to his chest. Ms. Tsarnaev, they are accused of killing an 8-year-old boy. You have got to be kidding me! An 8-year-old boy! A foreign exchange student! Another young woman! 180 people! You know what? You’ve made — your case is nonsense. I can’t take it. They are going to face the full weight of justice. You called in, you had your say, we know what’s happening now, and I’m sorry but I can’t take it anymore. Two terrorists: one down, one to go.”

Click below for a clip of the segment, courtesy of The Blaze and The Buck Sexton Show: