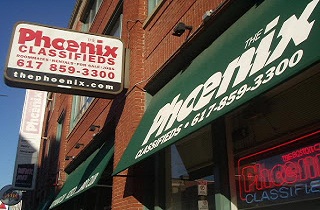 The Boston Phoenix, one of the most prominent alternative newspapers in American history is closing its doors after 47 years of operation. Current and former staffers have taken to the medium that’s largely responsible for its demise, the internet, to reminisce about this trail blazing publication that brought us so many great journalists and their work.

Esquire and Grantland‘s Charlie Pierce remembered how the Phoenix plucked him from obscurity after he hit rock bottom very early in his journalism career after being fired from a regional magazine.

For the next five years, I worked at the Boston Phoenix. Because, for most of my tenure, I was writing for my rent, I wrote everything they asked me to write. I wrote 6,000 words about lobsters and 5,000 words about raccoons. I covered the 1980 presidential campaign, and a weird trial where a bagman testified that he had been extorted by a state senator who’d been paying him off for over a decade, and the endless legal battle over the only porn house in Chelsea, which caused me to watch an X-rated movie with a 70-year-old judge and a bunch of jurors who may not have recovered for decades. I honed my chops. I became a generalist. I learned everything I know about being a journalist, and almost everything I know about being me in the world.

Boston Globe columnist Yvonne Abraham lamented how she wish she could take advantage of the Phoenix’s freewheeling nature to truly express how she felt about its shuttering.

I would tell you how I truly feel about the Boston Phoenix closing, but that would involve using words that could only be published in the Phoenix.

A G-rated approximation, then.

I’m very, very upset. And I’m beyond worried about the good people who produce great journalism and great criticism there — some of them my friends — who are now unemployed.

What happened today is bad news for Boston. And it’s an awfully bad sign for journalism in general. As if we needed any more of those.

New York mag’s David Edelstein noted that he missed the Phoenix but in many ways it died years before it shuttered its doors permanently this week.

The closing of the Boston Phoenix should hit me hard — it was my first professional gig as a film (and theater) critic, and I stayed nearly three years in the early eighties, before decamping for the Village Voice. I was thrilled every minute of my time there. No hyperbole: every minute. Naively or not, I felt it was everything I’d ever dreamed of in a place of work —loose, quirky, but with a sense of mission. A mandate to be smarter, more idiosyncratic, fearless. But I haven’t read it in years, even though it continued to publish many gifted writers. I think I stopped because it didn’t seem “special” anymore, because alternative journalism doesn’t mean what it did back then. Most journalism — almost everything on the Internet — is “alternative.” We won, and the Phoenix, I guess, finally lost.

Boston University professor and former Phoenix media critic Dan Kennedy believes the Phoenix saved him from a life of flacking for a politician.

Gradually, though, I got sucked in. And when I inherited the media beat in late 1994 from Mark Jurkowitz, I became a made member of the Phoenix family. It was the most formative experience of my career. Without the Phoenix, I can’t imagine what I’d be doing today — PR for some politician? Ugh.

Longform put together a great collection of all the great longreads produced by the Phoenix over the last 47 years here.