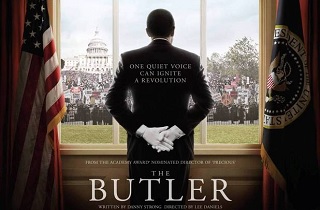 Now we know what all those cops were doing at that screening of Lee Daniels’ The Butler; they were guarding the huge stacks of cash the film is taking in. In a rare feat these days, the Civil Rights-themed drama The Butler held the top spot for a second consecutive weekend with a $17 million take, and suffered only a 30% decline from its opening weekend gross of $25 million. The Butler has already covered its $30 million budget, and then some, and is in great shape to follow its box office success with awards-season glory, but Hollywood is unlikely to jump on the bandwagon and begin cranking out dramas with predominantly black casts.

The historical drama The Butler easily won a second term as commander-in-chief of the North American box office beating out three new releases that each opened in the single-digit millions. Forest Whitaker’s White House saga declined by only 31% in its sophomore session to an estimated $17M pushing the ten-day total to an impressive $52.3M putting it on track to break the $100M mark and become one of the top five grossing films ever for its distributor.

The Weinstein Co. release held up almost as well as The Help from two years ago which dipped by only 23% in its second frame to $20M. That film, which also held the number one spot over these same two weekends in 2011, opened on a Wednesday and banked a larger $71.3M in the 12 days ending with its second weekend. It suffered no decline over the Labor Day frame so Butler is likely to post another strong result next weekend which is a session when moviegoers catch up on films they’ve been hearing about, but haven’t seen yet. Strong word-of-mouth, positive reviews, and weak competition have been helping Butler and should continue to assist the hit film in the weeks to come.

Additionally, the film will get another bite at the box office apple when awards season rolls around, and nominated films get an extra push from studios, and from moviegoers. Stars Forest Whitaker and Oprah Winfrey are well-positioned for acting nods, while the film and its director, Lee Daniels, are enjoying a particularly well-timed box office surge; early enough to get a jump on Oscar-bait competition, but not so early that the film disappears from Academy Awards voters’ memories.

In fact, this year’s awards season is shaping up to be an historic embarrassment of riches for dramas featuring black casts. In addition to Whitaker, Fruitvale Station‘s Michael B. Jordan is a serious contender for Best Actor gold, and upcoming turns from Idris Elba in Mandela: Long Walk To Freedom and Chiwetel Ejiofer in Twelve Years a Slave could also earn acting nods, and all four of these films could easily snag Best Picture nominations under the category’s new rules.

Despite the critical and box office success of black dramas, even in years past, usually imitation-hungry Hollywood is unlikely to start putting its production and marketing muscle behind black-themed dramas. The same Weinstein company that will be pushing The Butler this awards season also sent Hurricane Season, a Forest Whitaker-starring sports drama with a successful director, straight to video because “”It’s a very tough marketplace and unfortunately the film did not test well.”

In a great essay attending the release of the 2012 film Red Tails, then-CNN commentator Roland Martin noted the double standard regarding “black” films and Hollywood:

George Lucas has clearly expressed his fears with “Red Tails,” hoping it opens huge so it will send a message to Hollywood that a big-budget action film with lots of black folks can be successful. The downside? If it fails, it will be seen as a failure of ALL black action films.

Have we returned to the days of Jackie Robinson when he couldn’t fail because if he did, the whole race would be set back? That’s essentially what Hollywood is saying.

As if that weren’t unfair enough, though, the success of films like The Butler don’t seem to generate a corresponding reservoir of goodwill in Hollywood toward black dramas. Maybe this time will be different, an Hollywood will learn that a great film is a great film, and great films make money. Commence holding breath now.