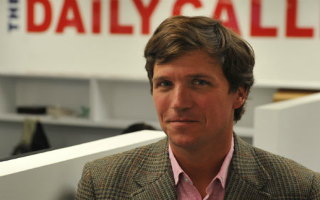 The Daily Caller’s White House correspondent, Neil Munro, who interrupted President Barack Obama’s Rose Garden press conference on Friday. Hours after that event, the Daily Caller’s co-founder and Fox News contributor, publisher and Munro himself weighed in on the controversy. The statements reveal that the online news organization is standing by their reporter and are even “proud” of his actions.

Munro said that he had prepared his questions for the President to be timed for after his remarks were complete:

I timed the question believing the president was closing his remarks, because naturally I have no intention of interrupting the President of the United States. I know he rarely takes questions before walking away from the podium. When I asked the question as he finished his speech, he turned his back on the many reporters, and walked away while I and at least one other reporter asked questions.”

The Daily Caller’s co-founder and regular cable news guest, Tucker Carlson, writes that he is astounded by the hypocrisy over the outrage directed at Munro that did not follow other reporters interrupting past presidents. Carlson said that he is standing by their White House correspondent:

“I don’t remember Diane Sawyer scolding her colleague Sam Donaldson for heckling President Reagan. And she shouldn’t have. A reporter’s job is to ask questions and get answers. Our job is to find out what the federal government is up to. Politicians often don’t want to tell us. A good reporter gets the story. We’re proud of Neil Munro.”

Finally, The Daily caller’s publisher, Neil Patel, writes that it is the President, not his publication, which should be embarrassed for refusing to “answer tough questions.”

“The President today announced a very controversial policy and does not want to answer tough questions about it. Neil Munro is a veteran Washington reporter who today tried his best to time his question to be first as the President was wrapping up his remarks. He in no way meant to heckle the President of the United States.”

For her part, CNN’s Senior White House Correspondent Brianna Keilar took to her twitter to take on Munro’s statement, which she said deserved a “big Cow Pie Award.”

I was two people over from Neil Munro. No one thought the president was wrapping up. I give that statement a great big Cow Pie Award.