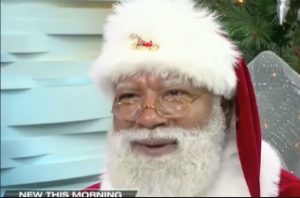 In a first for the Mall of America, Santa Claus will be portrayed by an African American man this Christmas.

Landon Luther, who heads The Santa Experience, told media outlets that he searched a Missouri convention for professional Santas this summer, in order to bring a bit of diversity to the mythical gift-giver. The Mall of America has been open for 24 years now, and as Washington Post reports, Larry Jefferson was chosen be the first Black man to fill the role at the country’s biggest shopping center.

“There need to be more Santas of color, because this is America, and kids need to see a Santa that looks like them,” Jefferson said. “That helps kids to identify with the love and spirit of the holiday, you know?”

For the first time the nation’s largest mall, @mallofamerica, will have a black Santa Claus: https://t.co/W91pHEo8Kh pic.twitter.com/s6E3YBPkRT

Jefferson’s depiction has been well received by local shoppers, and his appointments with children have already been booked solid throughout the weekend. Portraying Kris Kringle has been a passion of Jefferson’s for some time, and while children are sometimes surprised to find out Santa isn’t always white, he’s just happy to put a smile on their faces for the holidays.

“It’s hilarious to me. I’m really humbled by it,” said Jefferson with a chuckle. “Everyone’s making a big deal about this because I’m a black Santa. But gosh, I’m just Santa!”