The Media Must Face Facts: The FBI Is Hostile to Hillary Clinton
Opinion
VIDEO

The Media Must Face Facts: The FBI Is Hostile to Hillary Clinton 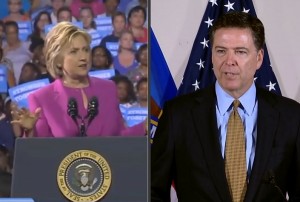 One of the stories the media used to push its treasured “both sides” narrative this week has been the FBI’s decision to send notes from Hillary Clinton‘s off-the-record interview over the now-closed email investigation, along with other secret materials about the investigation. The media has given the news the usual “no, there’s nothing newsworthy but it raises questions” treatment, including repeatedly noting that the Hillary Clinton campaign has urged the FBI to release the material publicly instead of letting Republicans leak and lie about it the way they have done so many times before.

What’s bothersome is that experienced journalists whom I greatly respect are treating the Clinton campaign’s position as just another political posture, rather than as a completely reasonable concern, and are similarly failing to call out the FBI for this outrageous action that can only serve to prejudice the public against Hillary Clinton, or for a pattern of behavior that is explicitly hostile to Hillary.

To be clear, the FBI doesn’t have to turn anything over to Congress, and in this case especially, they should not. The notes they’re sharing have absolutely no evidenciary value, for or against Hillary. There was no recording or transcript made of the interview, so nothing that’s contained in the notes is anything that would be admissible in court. The only thing these notes can be used for is to try and undermine the FBI’s recommendation not to charge Hillary, and by divulging them in secret, the FBI gives proven liars full control over how the notes get leaked. This is just the latest in a series of hostile actions by the FBI, against Hillary Clinton.

The first such action was not only clear, but became even clearer in hindsight. When Comey announced his recommendation not to charge Hillary Clinton, he was rightly criticized for heaping gratuitous and baseless criticism on the former secretary of state even as he was “clearing” her, including the clearly-labeled and self-contradictory speculation that Hillary’s served was probably hacked, even though there was no evidence that she was hacked, and there was evidence that others were hacked:

Since then, we’ve learned of countless other email hacks, but none from Hillary’s supposedly insecure server. We’ve also learned that contrary to what many have reported, there were actually a total of ZERO emails that were “marked classified” on Hillary Clinton’s personal server, and that there were a total of three that bore incomplete markings that even Comey admits would lead any expert to conclude that the documents in question were not classified.

Now, I can hear my “objective” colleagues wondering if I’m just being technical here, if I’m making a distinction without a difference. Those same colleagues should also ask themselves why, when Comey was trashing Hillary, he was so careful to make his claim this narrow and this precise:

When given the chance to clarify what he had already demonstrated he knew, Comey instead chose to mislead Congress into maintaining their belief that any of Hillary’s emails were properly “marked classified”:

It wasn’t until a Democratic lawmaker pressed him, and confronted him with the classification training manual, that Comey admitted that none of the emails were properly marked classified:

Comey’s press conference explaining how the person he was clearing was still horrible was completely gratuitous and unprecedented, just like the release of these notes, and all indicate that Comey and his FBI are not neutral actors, they are hostile to Hillary Clinton. The reasons for this hostility are less important than the hostility itself, but I’m sure it has a lot to do with Comey providing himself with political cover, and a little bit to do with the naturally adversarial relationship between federal agencies. In any case, it is the duty of good journalists to note the hostility, even if they can’t explain it.