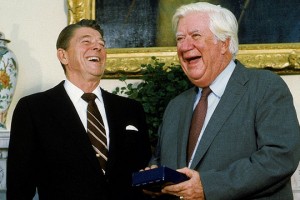 Speaker John Boehner‘s public refusal to allow President Obama to address a joint session of Congress Wednesday has touched off a media maelstrom that the White House has decried publicly (while privately fueling it), and the mainstream media has cast Boehner’s actions as a sign of Obama administration dysfunction. That narrative is aided by an emerging myth, that then-House Speaker Tip O’Neill once “Boehnered” Ronald Reagan, so Boehner’s insult to the presidency was no big deal.

On the heels of Boehner’s refusal, some media outlets reported that, according to the House and Senate historians, such an action was without precedent. However, the media was quick to try and cover its own ass by promoting the right-wing myth that Democratic Speaker Tip O’Neill had once done the same thing to Ronald Reagan. As a matter of fact, though, the Reagan/O’Neill spat was not only superficially different, but on a deeper level, it was the exact opposite. Reagan didn’t ask to address a joint session of Congress, he asked to address the House only (itself an action with little, if any, precedent), in an effort to jawbone them into supporting aid to the Contras in Nicaragua he already had the votes in the Senate). In refusing Reagan’s request, O’Neill actually offered the President a joint session. The President declined, his point made, and delivered his address from the Oval Office. Reagan got what he wanted (that time), but in case the media fails to remind you, check out how that whole thing turned out. Just for fun, contrast that with how things go when President Obama aids rebels.

Beyond that superficial, yet important, difference, there’s also the fact that O’Neill had already conveyed to President Reagan’s Chief of Staff, Donald Regan, that such a request would be denied, prior to Reagan’s public request. It was President Reagan who, in this instance, attempted to score political points by publicly airing a private negotiation. For what it’s worth, good for him. While the Executive and Legislature are co-equal branches of government, the President and the Speaker of the House are not equals, and Reagan’s maneuver, precedented or not, fell within the acceptable boundaries of governing politics.

By contrast, Boehner had every opportunity to make known his objection to the Wednesday date in private, before the President’s request was made public, and he declined to do so because he saw an opportunity to publicly put the President in his place. Even if you grant that President Obama’s request was purely motivated by a desire to overshadow Wednesday night’s Republican debate (a dubious claim, since such synchronicity presented the GOP with as much an opportunity as a disadvantage), and even if it was presented as more of a demand than a request, the respect accorded every previous President demanded that Boehner make his objection know in private first. As I said before, the President and the Speaker of the House are not equals, but Boehner seems to have inverted the relationship in his mind, and clearly sees President Obama as his inferior.

Some have also sought to muddy the issue of disrespect for the office by pointing out all the mean things people said about George W. Bush, but that’s a completely separate issue, with its own set of boundaries. When it came to respecting the office, Congress, the Democrats included (and even especially), heeded Bush’s every request for a “jump” by saying, “How high?”

In fact, if Bush had asked to deliver an address before a joint session of Congress on the same night as a Democratic debate, I’m quite confident the Democrats would have offered to move their debate to Saturday morning, and offered to cook Bush breakfast, for good measure.