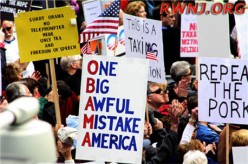 Plenty of space has been devoted in the last year to figuring out who the Tea Party movement is, why they exist, and who is in charge. Today The New Yorker reveals it has an answer to the most burning question of all: who is paying for it? Probably not who you think.

In a long investigative piece in this week’s issue Jane Mayer does some serious digging and reports that two New York City billionaire brothers: Charles and David Koch are footing a lot of the bills: “Their combined fortune of thirty-five billion dollars is exceeded only by those of Bill Gates and Warren Buffett.” From the piece:

“The Kochs are on a whole different level. There’s no one else who has spent this much money. The sheer dimension of it is what sets them apart. They have a pattern of lawbreaking, political manipulation, and obfuscation. I’ve been in Washington since Watergate, and I’ve never seen anything like it. They are the Standard Oil of our times.”

The Koch’s (pronounced ‘coke’) do not bear the external trappings one associates with the Tea Party movement: David Koch just donated $2.5 million to the American Ballet Theatre, his wife frequents Vanity Fair‘s best-dressed lists, and the couple recently decamped from Jackie Kennedy’s 5th Ave apartment because it wasn’t big enough. And yet: “The Kochs are longtime libertarians who believe in drastically lower personal and corporate taxes, minimal social services for the needy, and much less oversight of industry—especially environmental regulation.”

The Koch’s, who are heavy hitters in the Republican party — Mayer reports that in the second quarter of 2010, Koch was the biggest individual contributor to the RGA — deny vehemently any association to the Tea Party movement. And yet Mayer is able to follow the money, literally, from one to the other.

Ideas don’t happen on their own,” Matt Kibbe, the president of FreedomWorks, a Tea Party advocacy group, told me. “Throughout history, ideas need patrons.” The Koch brothers, after helping to create Cato and Mercatus, concluded that think tanks alone were not enough to effect change. They needed a mechanism to deliver those ideas to the street, and to attract the public’s support. In 1984, David Koch and Richard Fink created yet another organization, and Kibbe joined them. The group, Citizens for a Sound Economy, seemed like a grassroots movement, but according to the Center for Public Integrity it was sponsored principally by the Kochs, who provided $7.9 million between 1986 and 1993. Its mission, Kibbe said, “was to take these heavy ideas and translate them for mass America. . . . We read the same literature Obama did about nonviolent revolutions—Saul Alinsky, Gandhi, Martin Luther King. We studied the idea of the Boston Tea Party as an example of nonviolent social change. We learned we needed boots on the ground to sell ideas, not candidates.” Within a few years, the group had mobilized fifty paid field workers, in twenty-six states, to rally voters behind the Kochs’ agenda. David and Charles, according to one participant, were “very controlling, very top down. You can’t build an organization with them. They run it.”

And that is merely the tip of the iceberg, the article reads like a ‘follow the big money into Washington’ flow chart and watch how it comes out the other end disguised in the caricatures we’ve become so familiar with via the cablesphere. So much for the idea that real American’s are taking back America. Reflects David Axelrod: “What they don’t say is that, in part, this is a grassroots citizens’ movement brought to you by a bunch of oil billionaires.”

The Kochs have long depended on the public’s not knowing all the details about them. They have been content to operate what David Koch has called “the largest company that you’ve never heard of.” But with the growing prominence of the Tea Party, and with increased awareness of the Kochs’ ties to the movement, the brothers may find it harder to deflect scrutiny.

Or not. The speed of the news cycle being what it is, Facebook notes and handmade signs are far easier to digest than a 10,000 word essay filled with numbers.

Related: Covert Operations: The billionaire brothers who are waging a war against Obama. [The New Yorker]