The News Media Thinks They Finally Have Trump Cornered. They Are Wrong 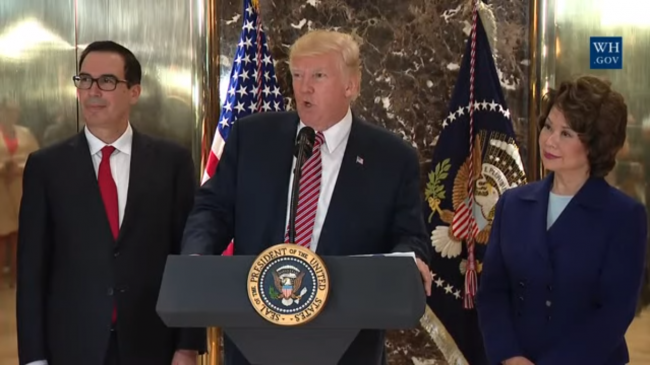 It has long been said that the definition of insanity is to keep doing the same thing over and over while expecting a different result. Such a strategy never worked out well in Wile E. Coyote’s endless pursuit of the Roadrunner, and it is still very unlikely to do so in the mainstream news media’s quixotic quest to bring down Donald Trump (after having gleefully given him billions in free advertising just over a year ago).

This week, after Trump’s bonkers press conference — which would have been great had he been a television guest on Fox News, but performed really horribly as the president of the United States — the news media seems to think they finally see political blood in the White House water. After all, there are some significant signs that THIS controversy is different and that the dynamics have somehow fundamentally changed.

A southern GOP Senator has lambasted Trump as incompetent. Three White House advisory boards have been disbanded because prominent business people no longer want to be associated with him. Trump properties are losing big business because of the blowback. Betting houses are giving basically even money on wagers that he will be impeached. Even the CEO of the company which owns Trump’s favorite state-run “news” organization, Fox News, is very publicly rebuking him.

For any previous modern president, this might indeed, as many are hoping/speculating, be the beginning of the end of his time in office. But in case you have forgotten, Donald Trump is no ordinary president, and nothing we have seen so far has dramatically shifted the fundamental realities of why he will be exceedingly difficult to drive from office.

I wrote at the beginning of this summer of insanity that the Trump cult (“Cult 45”) was specifically designed to weather nearly any storm. This current hurricane not only poses no mortal threat to Trump’s base of support, its winds may end up blowing, at least in part, at his back.

There are several important reasons why this is so obviously the case:

– Trump’s base is almost all white and very few white people who support him will be remotely offended by what he said.

– The mainstream media has almost no influence (except perhaps in an inverse direction) on Trump’s base, and the more outraged they become the more fired up his fans get.

– Trump was never thought to be strong on Civil Rights issues and therefore there is no shock/disappointment factor among average Americans.

– Most of the state-run “conservative” media outlets, while having chided him, have not remotely abandoned the ship as of yet.

– The GOP establishment is still forced to mostly stick by him as long as their political base does.

– Having the media/political/business establishment be super mad with Trump actually plays into his anti-establishment persona and his laughable “drain the swamp” campaign promise.

– You can’t kill the “Politically Incorrect” presidency by claiming that Trump is too politically incorrect (just like you can’t destroy the candidacy of a thrice-married beauty pageant owner with a tape of him bragging about grabbing pussy).

– The Democrats, as they ALWAYS do, are already WAY overplaying their hand to placate their own rabid base of support.

The issue of attacking Trump for being too politically incorrect is one that goes back to the beginning of the 2016 campaign. While publicly I was insisting that Trump couldn’t win a general election, behind the scenes I was urgently warning my good friend, Democratic Congressman John Yarmuth, that the Clinton campaign was going about it all the wrong way.

Anyone who was offended by Trump’s political incorrectness was already never going to vote for Trump, I told him. The best way to beat Trump was to eviscerate his strengths by exposing him as a lying conman who isn’t very rich and has no clue how to bring jobs back to the middle class.

The news media, despite the election results, has clearly still not learned this vital lesson. If you like Trump, you love his willingness to say things that the media hates, even if you might disagree with them at times. If the news media really wants to “get” Trump, they need to focus their umbrage on how those who voted for him have been duped by a guy who has delivered on none of his major promises.

Instead, the media has largely played right into Trump’s hands this week. For instance, he cautioned about the dangers of the slippery slope to tearing down Confederate monuments, and sure enough CNN had a guest say that, just as Trump had warned, even George Washington and Thomas Jefferson should not be spared.

Democrats, of course, never having seen a political hand that they can’t overplay, have gone off the deep end. Nancy Pelosi, seemingly having forgotten that she was once Speaker of the House and that Barack Obama was president for eight years, is now suddenly/absurdly making an issue of confederate statues in the Capitol. Meanwhile, other Democrats are drafting articles of Impeachment, saying Trump should be removed via the 25th Amendment, or, just flat-out assassinated.

Heck, if I wasn’t so convinced that Trump is mostly a dunce who is making all of this up as he goes along, I might actually think that he planned all of this brilliantly. You have to remember that Trump’s goals appear to have nothing to do with getting a majority of Americans to “approve” of him. I’m not even sure he intends to run for reelection.

Therefore, all that matters is his maintaining his base (and thus his leverage over the Republican Party.) And, as difficult as it may be for liberals to grasp this, nothing has happened this week which will significantly change that status. In fact, there is a decent chance that among some sub-groups (not just Neo-Nazis, by the way) his approval rating will actually go UP slightly because of this controversy and the liberal hyperbolic overreaction to Trump’s role in it.

Even better than that from Trump’s perspective is that forcing prominent GOP leaders to express disapproval of him actually forwards the most important narrative to him in the long run. You see, at some level, Trump knows he is going to fail as a president. Now he needs a scapegoat. Further showing his supporters that if he just hadn’t been surrounded by such back-stabbing PC wimps, he could have made America great again, serves his purposes just perfectly.