The Origin of the Term “NerdProm”: Ana Marie Cox, and Twitter 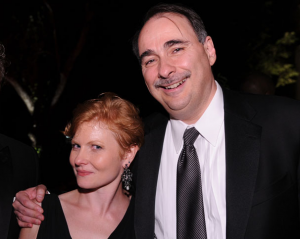 This a photo of GQ Washington Correspondent Ana Marie Cox and top Obama advisor David Axelrod. Yes, Axelrod is important, but let’s focus for a moment on Cox, who has indelibly made a mark on the White House Correspondents Dinner in one crucial way: It was she who dubbed it “NerdProm.” The WHCD was once jokingly referred to as “Prom” (a term I first heard from Politico’s Patrick Gavin, then at FishbowlDC)*, but last year on Twitter, Cox used the term and it caught on amongst members of the WH press corps (including, as I recall, well-read people like Jake Tapper, John Dickerson and Olivier Knox). Others outside the D.C. sphere soon picked it up (including me). 2009 was the first year that the WHCD had been properly Twittered (look at the adorable teensy showing in 2008!) – which meant that Twitter was the first place people were looking for their real-time WHCD news. Which meant that Twitter was leading the charge in setting tone and pushing mems. Which meant that those who were leaders on Twitter were the leaders in pushing those memes. Which brings us back to Ana Marie Cox, in whom resided a perfect storm of both Washington cool-kid cred and critical mass of Twitter followers.

While the #nerdprom hashtag was out in full force last year, it actually did not cross over into mainstream coverage all that much. I used it in the headline for my coverage at the Daily Beast (“Why The Nerd Prom Matters“) and Chris Cillizza used it on his WaPo blog, The Fix (“Twittering Nerd Prom“), but it was largely the province of the online-and-Twitter-savvy. Cut to this year, where there are now 33,800 Google hits for “nerdprom” and 17,500 for “Nerd Prom” – plus all sorts of headlines: “Real Nerds Skip Nerdprom‎” (New Republic); “Kim Kardashian plays chess at DC’s annual ‘nerd prom’‎” (Telegraph UK); “Rate The Celebrities from Nerd Prom!” (HuffPo) and, my personal favorite, this from the venerable WaPo “Reliable Source” column, veteran of many a WHCD: ““Nerd Prom” no longer: Celebrities steal spotlight from press, president, politicians, at White House Correspondents’ Dinner and after-parties.” From zero to being a “no longer” of a years-long tradition in 365 days flat. That’s quick work for a meme.

I can only find two places confirming that Cox started the #nerdprom meme: Dylan Stableford at The Wrap this year and Cillizza last year. I’m sure there are more, but it seemed worthwhile to get this important piece of WHCD history officially on the books.

It should be noted, btw, that Cox did not coin the actual phrase “Nerd Prom,” just applied it to the WHCD. “I think ‘nerdprom’ was coined to describe Comicon,” Cox wrote me in an email. “But I think I helped make WHCD into nerdprom east.”

Indeed it was, and indeed she did.

*A clarification on the usage of the term “Prom” for the WHCD: According to Washingtonian Magazine editor Garrett Graff,
Anne Schroeder was the first to
usen “prom” in reference to the WHCD, in the “Names & Faces” column in the Washington Post. Graff, who was then writing FishbowlDC, used it for the WHCD cateogory (see the exhaustive “Prom” list), first using it in April 2005.

**It must be noted: the phrase gained its own version of immortality a solid two decades before any of this, on Saturday Night Live with nerds-in-love Todd and Lisa, aka Bill Murray and Gilda Radner. The original “Nerd Prom” sketch is below.