Is Texts From Bennett Real? 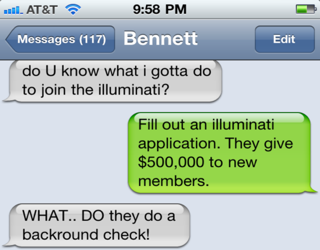 If you’ve been online at all this week, someone probably sent you a link to the blog “Texts from Bennett,” a collection of text message conversations between the site’s owner and, supposedly, a 17-year-old named Bennett, who “thinks he is a crip, works at Amoco, has a girlfriend named Mercedes, and is one of the most unintentionally funny and brilliant souls on the planet.” If so, The Smoking Gun has some bad news for you: the father of the blog’s owner has come out and essentially admitted that his “nephew” Bennett doesn’t exist. Update: the site’s author responds below.

The blog chronicles the textual adventures of its author, now known to be David Sheldon (who raps under the name Mac Lethal), and Bennett, the teenage phenom. Bennett asks his elder cousin things like how to poison a dog or join the Illuminati, gets arrested for using a hose to fill up his neighbor’s car with water, and is constantly being unintentionally racist or sexist. He also has significant spelling problems and is constantly trying to assert his “gangstaness.”

The Smoking Gun went straight to the source, who said the texts were all real. His father, however, had a different reaction to his reported nephew:

While Sheldon has said that “Bennett” actually exists and the texts are “100% real,” the rapper’s own father today directly contradicted those claims. Asked by TSG if his son had a 17-year-old cousin named Bennett, Sheldon’s father, also named David, laughed and said, “That’s what he says.”

The elder Sheldon went on to note that his son has a friend who is prone to “Yogi Berraisms” and that he uses some of these malaprops for the “Bennett” blog. The friend’s name, he said, “has been changed to protect the innocent.” “Mac writes them,” Sheldon said, “and puts it in the form of texts.”

Perhaps there is a Bennett! But he is not the cousin described, nor are his texts particularly as brilliantly written in their organic form as they are presented. So the question remaining is not whether “Bennett” is fake at this point, but to what extent he is– and even so, would anyone really stop reading the site? While the website attempted to wheedle out a better answer than what they got from Sheldon’s father, Sheldon himself protested, “you try to ruin the fun for everyone.”

Update: The younger Sheldon responded to this post sending Mediaite an exclusive statement responding to the Smoking Gun report, explaining that the site somehow contacted his father without explaining how they had found him and inappropriately invading his privacy. He also added a few more bits of information on who Bennett is, and why it is important for his identity to remain a mystery:

The Smoking Gun called my father at home without any explanation for how they got his number.

In order to protect his family, obviously, he would not give them any information and told them this. The writer of the story then explained his speculation as to what he THOUGHT the truth was. My dad said he was wrong and wouldn’t comment much further.

I caught wind of the journalist calling my dad, so when he called me, I was very upset. It was very out of line to call my dad at home and try to manipulate him. I yelled at the journalist and told him to stop stalking my family members and that I would give him no information on who Bennett is.

For the record, Bennett is Bennett’s legal middle name. I will not disclose his first or last night, to protect him and the blog. He is unaware it exists, and I want to keep it that way.

Update 2: Sheldon forwards us a comment from his father, in which he details the contents of his conversation with The Smoking Gun which led the publication to claim they had a confirmation that Bennett is not real, adding that Bennett “is exactly who Mac says he is.” If Sheldon’s is an accurate depiction of the conversation, it is very difficult to see how The Smoking Gun could legitimately claim they had proof the site was fake:

I have a very good memory of this call, because I was suspicious of him and how he got my unlisted phone number, I asked him that and he gave me some lame answer about a Time Warner phonebill database, yadda, yadda, so I let it go.

The reporter says to me: ” So your son says Bennett is a real person, hahahaha,”
I replied: “Yes, that is what he says, hahahaha”
Reporter: “So is Bennett a real person?”
I replied: Yes, sure he is, he is our relative that is always saying things that makes our mouths drop open. We have always thought of him as our own Yogi Berra”.
Reporter: “And Bennett is his real name?”
I replied: “Well, , Bennett is what the family calls him”. I did not elaborate further, gave him Mac’s phone number.
How this reporter got from our call that (1) Bennett is not real or (2) all these Bennett comments are from some friend of Mac’s is just not true. Nothing like he said was close to being true.