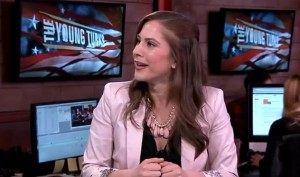 Greg Gutfeld, 20% of Fox News’ The Five, raised more hackles than a flock of geese at a screening of The Sixth Sense when he opined that the National Organization for Women is now superfluous because women have secured the right to shop. During Tuesday’s online edition of The Young Turks, co-host Ana Kasparian said what a lot of people were probably thinking: “Fuck you!”

On Friday’s edition of Fox News’ The Five (a tribute to the network’s viewers who can read)(Ikid!), insomnia-famous co-host Greg Gutfeld ripped NOW for being “perhaps victims of their own success,” adding that “They’re not as relevant as they are anymore because women have, you know, all the rights that, you know, they can shop…”

He left out some other historic gains by women, like the right to use whatever contraceptives their bosses say they can, or to close their eyes when the state is forcing an ultrasound probe into them, or even to get paid almost as much as men.

It was a bit of the empty-calorie provocation that fuels the conservative humorsphere, a way of telling these women to go “get their fuckin’ shine box,” as Billy Batts would say. The ostensible intent was to bait strong reactions from “those women,” but the premise of the joke, that such reactions are unwarranted, doesn’t mesh with reality.

Ana Kasparian, who has been with The Young Turks for going on five years now, took major exception to Gutfeld’s remark. “I’m going to make an argument that misogyny doesn’t exist,” she said, “that women have all the rights they want, by making a sexist comment about them. Fuck you!”

She then tore into Gutfeld’s employer, saying “But that’s what Fox News is, right? They hire clowns to make clownish arguments.”

Host Cenk Uygur pointed out that, although Gutfeld was clearly joking, the policies that conservatives are pushing “are against women.”

In fairness to Greg Gutfeld, his remark might have come off better had he made it on his late-late-night show, Red Eye, which has a more libertarian, equal-opportunity-offender flavor to it than The Five. In that setting, the crack could have been interpreted as a jab-within-a-jab at the rampant misogyny that women still face, even conservative ones. On the more uptight, conservative afternoon show, it just came off as piggish.