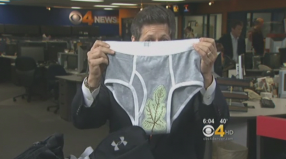 Are you having a hard time looking for the perfect holiday gift for your friends and family members who have genitals so incredible and unique that airport security workers will inevitably begin hoarding fuzzy, x-ray images of them? Well, Jeff Buske, a Colorado inventor, has got you covered. Buske has invented a line of underwear with metallic inserts designed to block out the TSA’s prying eyes and protect you from harmful radiation. The inserts are shaped like fig leaves, making the same leaves Adam and Eve wore when the serpent attempted to touch their junk.

“‘The object is not to make money but to protect the public, educate people and ultimately see these X-Ray machines put in the dumpster,’ said Buske.

He said it’s impossible to hide something from TSA screeners behind the metal plates.

‘If someone is trying to hide something large under the thing it’s going to show up as a bulge, visible to the eye, the product is very thin,’ said Buske .”

It’s an interesting idea and another sign of growing dissatisfaction with the TSA’s measures, but isn’t there an obvious problem here? If you go through the scanner and the guard sees that you have purposefully affixed metal inserts on your body to hide something from them, wouldn’t that give them a very clear and specific reason to look in exactly those areas? So instead of having someone look at your bikini area with a computer, you’ll kind of be forcing them to reach their hands into your undies to find out what’s down there. I mean, Buske claims you can’t hide anything under the inserts, but unless these are recognizably mass-produced items, the guards probably aren’t going to know that.

Oh well, if they do protect people from radioactive rays (which the TSA is still claiming isn’t a problem) then that will probably be enough for most people. And honestly, we’re fine with that. We hope these catch on. Mostly to see if the next line contains “sexy” metallic insert underwear for members of the Mile High Club.