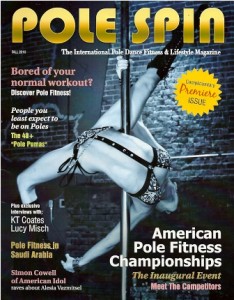 A few things go through your mind when you look at the inaugural cover of Pole Spin magazine: (1) Wow (2) I don’t think I can do that (3) I’m not sure where to put my eyes (4) I wonder if that’s comfortable (5) I definitely couldn’t do that (6) there’s a Pole Spin magazine? But yes, it’s true – there is a Pole Spin magazine, celebrating the grace and strength and physical fitness of the women – and men! – who work the pole, fearlessly, flexibly and with pride.

To quote the Today Show tumblr: “Who says print media is in trouble?”

l admit, I was one of the people who thought of pole dancing as something sexual, something women do to show off and please men. So this magazine — with its grilled salmon recipe, positive attitude and stories of women discovering their physical strength — was fairly educational. It showcased men and women of all ages and ethnicities, united in a common past time. Still, even if pole dancing is really just a form of gymnastics, unfortunately, the pole still gets called a “stripper pole.”

The tags on Jezebel’s write up – and extensive (and compelling) photogallery include #magazines, #athletes, #athleticism, #gymnastics, #stripperpole and #fleshbot. Clearly the mag has a broad mandate.

I will note that it’s  pretty interesting and compelling cover, striking for its athleticism first (it seems like it could be the cover of a dance magazine, which, I guess, it is). Also these articles! “Pole Fitness in Saudi Arabia” “People you least expect to be on Poles” (ok cover copyeditor, time to work on consistency lest you offend a certain pierogi-loving nation) and “The Pole Pumas – Under 40 Need Not Apply” (see here. They look great!). There are also some beefcake-athlete shots of two superbly-conditioned blonde athletes who look like they could be the villains in the future pole-dancing version of “Blades of Glory” (check out him and her and see if you don’t agree!). Okay now I really really want to see that movie.

Anyway – Pole Spin magazine. It exists, and it looks pretty non-exploitative, though as Stewart notes, the animal-print be-stiletto’d catsuited editor’s photo maybe doesn’t help much. But still, niches are there to be serviced! Or, er, served. In the  meantime, one thing is clear: I definitely couldn’t do that.