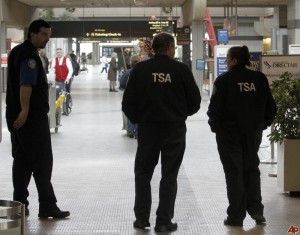 The TSA hasn’t been getting a lot of good press lately. First off, there was all that junk touching. Then there was that story about TSA agents stealing a bunch of stuff. Now, a restaurant in the Seattle area is fighting back by refusing to serve people who work for the TSA. Interesting idea but I think, if they really want to get them, they should just only serve them three ounces of their drink order.

The restaurant in question is a cafe outside of the Seattle-Tacoma International Airport that now has signs on their doors saying TSA agents aren’t welcome meaning, I suppose, that it’s only open to passengers and flight staff (God, I hope the sign doesn’t read “FLIGHTS ONLY”). KC McLawson, a woman who works for the restaurant, explained the policy to consumer advocate Christopher Elliott:

“My boss flies quite a bit and he has an amazing ability to remember faces. If he sees a TSA agent come in we turn our backs and completely ignore them, and tell them to leave.

Their kind aren’t welcomed in our establishment.

A large majority of our customers — over 90 percent — agree with our stance and stand by our decision.

We even have the police on our side and they have helped us escort TSA agents out of our cafe. Until TSA agents start treating us with the respect and dignity that we deserve, then things will change for them in the private sector.”

Congratulations, TSA agents. Thanks to rules made by the people you work for, you’ve officially replaced lawyers as America’s most hated workers.