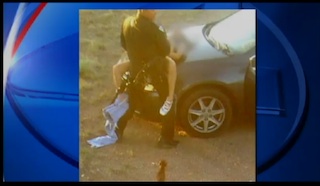 The dystopia is now. We live in a world where we’re constantly being watched. Where Big Brother can see everything we do through the use of millions and millions of cameras and satellites. No one is safe. Not even those who are supposed to be serving The Man.

Never has that been better shown than in this story of a New Mexico state police officer in serious trouble due to surveillance camera footage. Big Brother has clearly brought him down and, judging by the fact that the footage shows him having sex with a woman on the hood of his car while in full uniform, he is clearly the man.

The intrepid team at Albuquerque’s KOB Eyewitness News 4 managed to get the pictures by filing a public records request. They’re promising to push the state police department (who, shockingly aren’t thrilled to discuss the matter) and get to the bottom of who the officer is. After all, he’s doing this in broad daylight and, after my extensive research into Albuquerque area crime, I can tell that that’s when some of the awesomest criminal acts occur.

The one question that really remains though is who is that prairie dog in the picture’s foreground shown watching the whole thing? Agent of Big Brother? Or small mammal pervert? Either way, the dystopia is now.

Watch the report from KOB below which features some great man on the street interviews (Why don’t reporters ever run up to me and show me sex pictures? So lame):