This May Be the Douchiest Interview in Cable News History 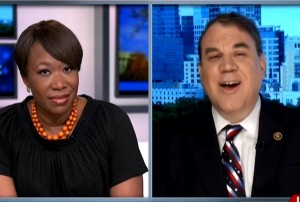 Earlier this week , a spat between Senate Minority Leader Harry Reid  (D-NV) and Rep. Alan Grayson (D-FL) made the rounds, a spat which centered around an Office of Congressional Ethics investigation of Grayson’s hedge fund (please don’t fall asleep). The issue itself is rather complicated, but the interview Grayson gave to MSNBC’s Joy Reid Saturday morning makes one thing clear: Grayson is definitely guilty of being a total jerk.

Reid introduced the interview by detailing a New York Times report on the ethics investigation, but when she tried to ask him about the spat with Leader Reid, Grayson began a six-minute campaign of douchebaggery that might just land him an endorsement deal with Massengill. Rather than bore you with the blow-by-blow, just watch:

Now, this is a complicated issue, and the way it’s being reported, Grayson is right, he’s technically still under investigation but probably in the clear, but he’s being such a weenie about it that you start to wish he wasn’t. One thing is for sure, though, and that is that he’s not just being a mansplaining jerk here, he’s being dishonest. When the New York Times contacted him about the brochure, he made no objections to its authenticity, only to whether it had ever been circulated, and his repeated assertions about the metadata are just wrong. The document’s metadata would not prove when the brochure was produced and printed, but only when the New York Times scanned it and uploaded it. Grayson also said the brochure was not from the OCE report, but a portion of it, the portion with Grayson’s name and face on it, actually were reproduced in that report.

Why lie about these things, and be such a jerk about it? Probably because even if Grayson manages to get clear of these complaints, the revelations in the reports are embarrassing. The brochure, circulated or not, says the fund “capitalize(s) on markets in turmoil due to economic, political or natural disasters,” and that “Alan Grayson specializes in discovering outstanding companies that are undervalued due to forces beyond their control.”

If Grayson can manage to bigfoot every interview and muddy the waters with lies about metadata, then the base of his support that expects him to behave this way will never have to pay any of it any mind.